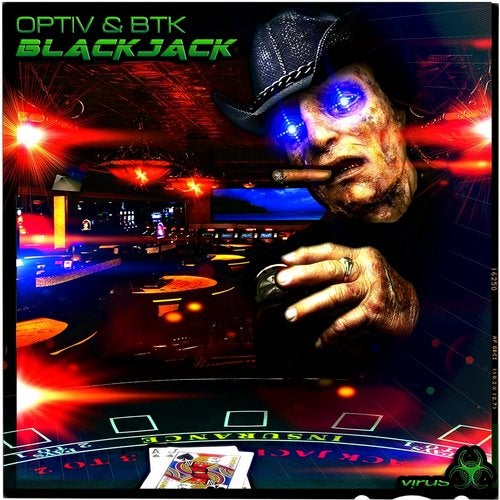 Over the years DnB has seen literally thousands of record labels come and go. But amid the infinite imprints that have provided an outlet for the music, very few can claim to have had anywhere near the influence of Virus Recordings.

Optiv & BTK join forces and invite you into their Blackjack album. Representing the next step in both their journeys, the album sets the stage for Virus Recordings for both this year and the future.

Take a trip into the darkside with Optiv & BTK as your guides.

Optiv & BTK join forces and invite you into their Blackjack album. Representing the next step in both their journeys, the album sets the stage for Virus Recordings for both this year and the future. With dynamism, funk and an overarching sense of groove, the record plays to the strengths of both producers, creating something which is more than the sum of its parts. Take a trip into the darkside, with the experience and talent of Optiv & BTK as your guides.

The album begins with tracks like the stalking, shimmering title cut, which features vocals from MC Rymetyme. The pace is picked up with choices such as Telepathy and Subterranean, which show that BTK and Optiv, both with years in the game, are still repositories of new, fresh and invigorating ideas. The latter, especially, see the producers go deep, working the elements of their tracks into different directions, but holding things together like only they can do. The sawing, cutting Shredder is an absolutely huge track, taking influence from both electro and dark techno, to create a menacing underworld where the stuff of nightmares comes alive.

Next up, one for the heads! Intruder, which features Mindscape. An electronic voice guides you in, before the pace is slowly built up, and flashy effects lead up to the drop. The name of the label is all over this one, and the smash-through beats and bass are something to behold.
Complete dancefloor devastation has always been Optiv and BTK's aim, and if that is your bag, go no further than the phenomenal Dirt Box, with its riffing, riding bassline and pure in-your-face feel. Nothing will feel the same after you hear it, but there's no rest, as Ground Shaker (with Nuklear MC) and Snake Bite (once again with Rymetyme) keep up the pace. The album is fresh, exciting, and shows two masters of the music taking it far and wide. The beats smash anything they have done to date, and the basslines are always hard and tight throughout.

Touches of the old skool on Nemesis (with Mindscape), and the sheer power of Weapon Of Choice show the variety at the heart of Blackjack, and the passion and delivery of cuts like Heart Shape (which benefits from the inclusion of Black Sun Empire) shows that the years have taken nothing from Optiv& BTK's creative flow, and desire to rock the crowd.