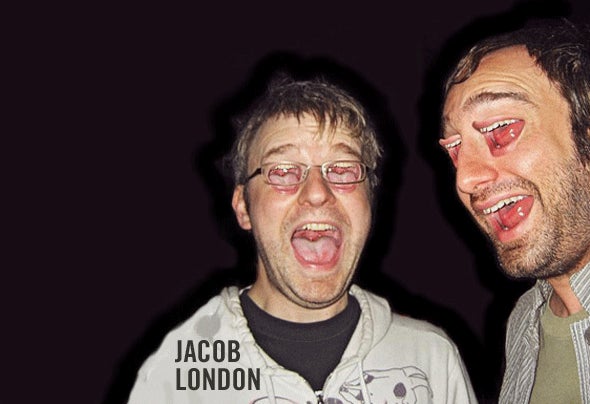 Bob Hansen and Dave Pezzner were brought together by the unmistakable forces of The Universe in a period of time many of the World's civilizations have agreed should be referred to as "1992". The U.S. economy was looking up, and naturally Bob and Dave began to create relatively awful industrial compositions that they were not allowed to perform in their high-school's student talent competition. Taking the rejection in stride, they continued on until exposure to rave mega-anthems such as L.A. Style's "James Brown is Dead" and Church of Extacy's "Ooowee I Am Ready" caught their interest and inspired them to begin creating lo-fi rave mega-anthems of their own that were slightly (and increasingly) less awful than what they had been doing up until that point. For years they immersed themselves in refining their sound and performing live PA's under a name that you don't really need, or want, to know about. By the time important people were busy convincing the World's population that it was "1998", Bob and Dave had taken the opportunity to release their first record ("Hydrogenated Funk") on Carlos DaSilva's upstart eatHouse label, along with forging a new identity for themselves as Jacob London. This record garnered them a moderate amount of attention from DJ Sneak and others, which they proceeded to not capitalize on for another 3 years or so. In "2001" (for lack of a better term), the duo entered into a short-lived and well-respected business relationship with Jon Lemmon's Viva Recordings and were foolishly given free reign over their own record label, which they dubbed squid:records. They released three Jacob London EP's over the following two years and pulled in two of their long-time house music heroes, Carl Finlow (aka Random Factor) and Tony Senghore, for remix duties. The squid releases were well-received and the unique sense of humor and personality that Bob and Dave saturated each of their productions with caught on and led to releases on Free the Funk, Stay True, Doubledown, U-Freqs, and Derrick Carter & Luke Solomon's enormously popular Classic label. Recently, Jacob London have been neglecting important areas of their personal lives (hygiene not included) with a steady flow of remix offers and international gigging, including Toronto, Japan, the UK, Vancouver BC, and Cleveland.