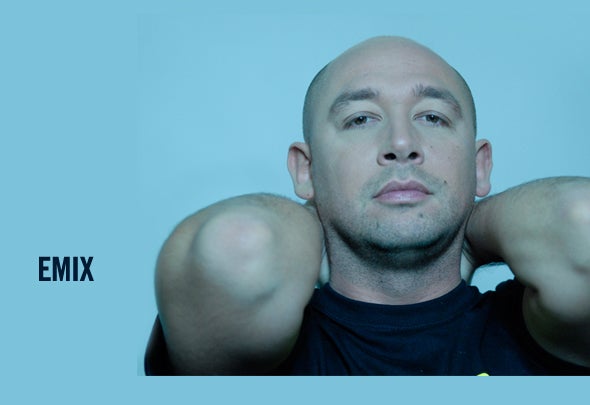 Emiliano Mosci, better known as Emix, starts performing as techno-dj in September 1996; his career begins with 'raves' and 'after-hours'. His love for 80's music and his constant research for new sounds will be relevant to turn him in a rare gramophone (or vinyl) records 'collector'. From 1992 to 1995 he made a name for himself at local level with Techno-Acid parties until the great event: 'The Dream', on the 31st of December in 1995 (Anzio), where he attracted reviews as new techno-progressive's dj revelation. In the following year he was 'resident-dj' in some of the most prestigious italian clubs: Palladium, Hollywood, Red Zone, Arabesk, Piper and even at the very trendy Muccassassina, where he proposed some unforgettable dj/sets until July 2004. Actually he is 'resident-dj' every Tuesday in 'after' at the Space (Ibiza), on summer every Friday at Cocoricò (Riccione) and every Saturday at Diabolika (Nrg/Rome). He also performed in some other european and international prestigious clubs such as: Goliath (Hallen Stadion, Zurich), Lipgloss (San Diego, Ca.), Street Parade (Zurich), Space (Valencia), Pacha (Palma De Mallorca), Pacha ( Barcelona), Liquid (Le Sal, Barcelona), Menagerie (Miami beach, Fl.), Tropix (Barcelona) and many more… He also collaborates with one of the most famous italian radio-networks: 'M2O', where he proposes some dj/sets every Monday from 2.30 a.m. to 4.00 a.m. (In Da House) and , on summer, every day from 7.00 p.m. to 8.00 p.m. His discography gets success pretty soon, also due to his meeting with friend and colleague D-Lewis in 1992, with whom he shares most of his works and appearances ( HYPERLINK "http://www.motorestudio.it" www.motorestudio.it). The first 'vinyl record' was released in 1996 on 'Zoomedia Rec' and since then, other sixty of them have come out. They even collaborate with some Italian labels as: Evidence, Exp, Gas, Molto, Start, Status, Mr. Disk Paprika, I'm, Algoritmic, Full Time, Sound real, Spectra, Python, Stereo seven, Nib, Dbx&Clubbin. With the last one they imposed themselves in the italian and international outlook, getting good references from reviews, working on and realizing the Off ‘ s 'Electrica salsa' ‘s cover , with the voice of Sven Vath, broadcasted on the Deejay Parade in 2004 and with the Exogroove's remix feat. Tony Bruno. But it's with the track 'Scariche' (Acid 80's label) that they soon get success and good references from most of reviews. They realized several mixed compilations and, for Antibemusic, they got the stage-managing supervision of some other's famous compilations like 'un-Mixed House Family', Electro Family, Minimal Techno, Acid 80', Zig Zag and Abm's labels. In 2006 they realized Officine Romane, their first album, together with the main video 'Baby', the first single to come out. Their musical journey is always in constant research ( trying to maintain as possible their own style), as some of their 2009's works show: Go, Voglio dormire, Oslo, Angelina, Nitro, Speak where house and minimal-techno sounds can be easly recognized. In 2008 he became an Anpad's honorary member ( national producers,autors and disc-jockey's association)-(www.anpad.it). Actually he is taking part , together with D-Lewis, to a project titled 'Reazione' ( HYPERLINK "http://www.reazione.co.uk" www.reazione.co.uk), their new Efx show where they perform in 'back to back' through over the night. Reazione is a famous music event that monthly takes part in two of the most prestigious european nightlife's clubs : at NRG (Rome) and at Cocoricò (Riccione) . From January on european tour.