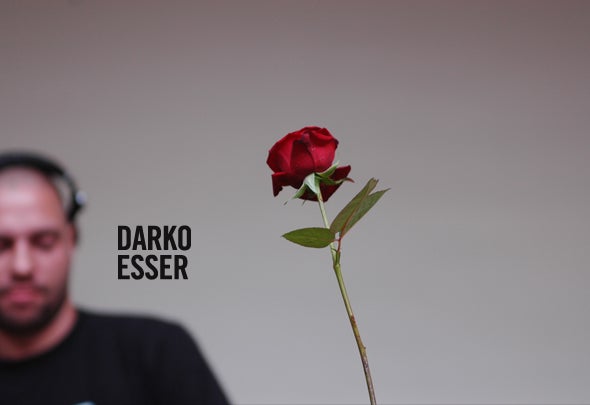 BIOGRAPHY DARKO ESSER Darko Esser has a few very successful years behind him. He can look back on performances at festivals like Extrema, Awakenings and Lowlands. He's also been busy with releasing his own records on prestigious labels Underwater, Audiomatique and Ovum. Furthermore, the Dutch public voted Doornroosje, where Darko is in charge of dance, 'Club of the Year' (Nieuwe Revu Nachttempel Award) in 2006. Even though the past looks good, the future looks even better. On december 8th 2006, Darko's first record on Josh Wink's Ovum label will be released. Also coming up are releases on Deep Focus (Onionboy EP, with remixes by Le Clic a.o.), Wolfskuil (solo record with remix by Petter) and Poussez!. This label, owned by DJ Yellow, will release a Darko Esser single next year. Darko also remixed Mateo Murphy's track 'Solaris' for Mateo's upcoming EP. Darren Emerson's label Underwater has contracted Darko and his good friend Benny Rodrigues for 2 EP's: one with tracks by Benny and Darko and one with tracks by Benny, Darko and Warren Fellow. And finally: Darko's remix for Baxter Priestly 'Release your head' will be released on Manual Music in January of 2007. Darko got infected by the house virus in 1993 at illegal parties in and around The Hague. But it wasn't until 1995 that he moved to Groningen and started to DJ at small events and in local clubs, like Vera and Simplon. In 1996, he became Simplon's first dance-promoter. The venue soon decided to give him a monthly residency. In the years that followed, Darko built a good reputation for himself as a DJ. He was asked to play in clubs and at events all across the country, as well as in well known foreign clubs such as Tresor, House of God and Moog. In 2003, Darko Esser started Wolfskuil Records together with his friend Ger Laning (DJ LL). Wolfskuil's first releases got good reviews in magazines like Groove, De-Bug and Raveline and DJ-support from Josh Wink, Charles Siegling, Derrick May, Dave Clarke, Laurent Garnier, Ben Sims, Michel de Hey, Benny Rodrigues, Carl Craig, Ricardo Villalobos and John Selway, amongst others. Darko started releasing his own music on Wolfskuil, as well as on Audiomatique, Veto, Fingers Ltd. and Flux Recordings. His records receive DJ support from Josh Wink, John Peel (R.I.P.), Laurent Garnier, Carl Cox, Darren Emerson, Steve Bug, Ricardo Villalobos, Dave Clarke, Funk D'Void, Deetron, Ame, Chris Fortier, 2000 and One, Shinedoe, Angel Molina, Nic Fanciulli, Loco Dice, DJ Yellow and Benny Rodrigues, to name a few. In 2000, Darko switched jobs and moved to Nijmegen, to become a promoter for the legendary club Doornroosje. There, he started promoting successful clubnights Planet Rose (techno) and Jungle Galaxy (drum 'n bass), World famous artists such as Daft Punk, Jeff Mills, Dave Clarke and Ricardo Villalobos made their Dutch debut on the Doornroosje stage. Planet Rose celebrated it's 11th birthday in January 2006. Because of his experience and knowledge, Darko is frequently asked as an advisor for events and festivals like Eurosonic and Noorderslag. To promote all his upcoming releases, Darko will focus more on playing live in the future. He also still plays back2back sets with Benny Rodrigues on special occasions.