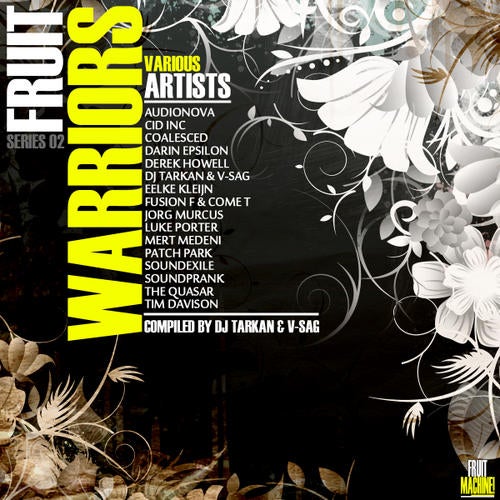 Do you remember the first edition of the compilation "Fruit Warriors Series 01" by Fusion F & Come T? We have great information for you! Soon to be released the next edition of this series, supported by dj's throughout the world and recommended by Beatport on the main page. This is a wonderful occasion to listen a lot of club music from great artist again. Compilation "Fruit Warriors series 02" is the result of two well-known and respected producers and DJs: DJ Tarkan & V-Sag.DJ Tarkan Turkeys Number 1, is one of the best names on the worlds electronic dance music scene. The creativity of excellent fluent sets and brilliant mixing skills made the talented DJ and Producer Tarkan a well known name all over the world in a very short time. DJ Tarkan was voted Number 78 in the world by DJ Magazine's most important poll in dance music and was the first turkish DJ and Producer who entered the Top 100 since the poll has started.V-Sag - Greek electronic music producer, born in Larissa (Greece) is making a difference with his quality music, having remixed major artists like Loreena McKennitt and Bad Boys Blue. The brilliant musician has managed to be one of the top 150 DJs in the world by DJ Magazine's most important poll in dance music.The effect of their selection that produces from stars such as: Eelke Kleijn, Tim Davison, Cid Inc, Derek Howell, Fusion F & Come T, Soundexile, Patch Park, Darin Epsilon, Luke Porter. The producers list is impressive and certainly encouraged to listen it. We hope you enjoy this release and will wait for the next edition of the series "Fruit Warriors" from Fruit Machine, of course!