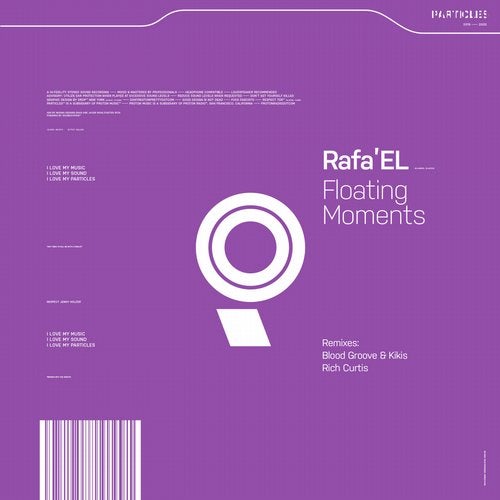 Over a decade spent "developing and polishing his musical sense" has seen Rafael Ligienza carve out a sizeable niche with his Rafa'EL moniker. A renowned DJ showcased via his monthly "Infusion" show on Proton Radio, the Polish artist can boast over a double century of production credits to his name for some of the finest modern imprints including: Afterglow, ICONYC and Balkan Connection. A debut on Particles in August 2015 saw a collaboration with fellow countryman, Tuxedo, before his "Twin Flames" EP hit the stores in June 2018. Returning with a brand-new original track, "Floating Moments" is chock-full of percussive energy and subterranean bass prowess. Developing elegantly, melodic motifs drift subtly in and out of tune, reaching their pinnacle at the stripped back breakdown. Hitting its stride again in the second half, rhythm, bassline and melody combine to mesmerising effect.

Latvian duo, Blood Groove and Kikis, need little introduction to the Particles faithful. Able to point to over 500 production credits across a plethora of high-profile labels, the pair have been regulars on the likes of Spring Tube and Silk Music. Indeed, the latter saw the release of a notable highlight in 2014's "Wonderland" album. Finding their way onto Particles in 2015, Blood Groove and Kikis have showcased their remix skills in abundance, further enhanced with a typically impressive reworking of "Floating Moments". Taking melodic elements from the original, the duo have crafted a swathe of new phrases and additional production material that takes Rafa'EL's work in intriguing new directions. Encased in a crisp rhythmic shell, the remix wax and wanes in effortless fashion building into a sonic extravaganza in the second half that cleverly captures world music flavours.

An artist with renowned DJ credentials that have seen him perform across his native Australia while also bringing some of the dance industry's biggest names to his Queensland home, Rich Curtis continues to operate at the vanguard of the underground. An accomplished musician, Curtis has seen his production work hit the catalogues of such celebrated imprints as Replug, Sudbeat and John 00 Fleming's JOOF. Remixes for Particles have seen Curtis rework the likes of Kobana, Huminal and Matter as he now returns to remix Rafa'EL. Immediately hitting hard with strong beat, off-beat percussive cadence and a rich glissando bassline framework, shimmering melodic motifs that resonate with the "Floating Moments" original pan across the left-right spectrum in dizzying fashion. A swathe of additional production material from the Rich Curtis arsenal makes its presence felt, especially in a wonderfully emotive breakdown, as the second half picks up the pace once more with new sequences and driving rhythmic force.

Anchored in strong remixes from Blood Groove and Kikis and Rich Curtis, Rafa'EL has "Floating Moments" to remember.