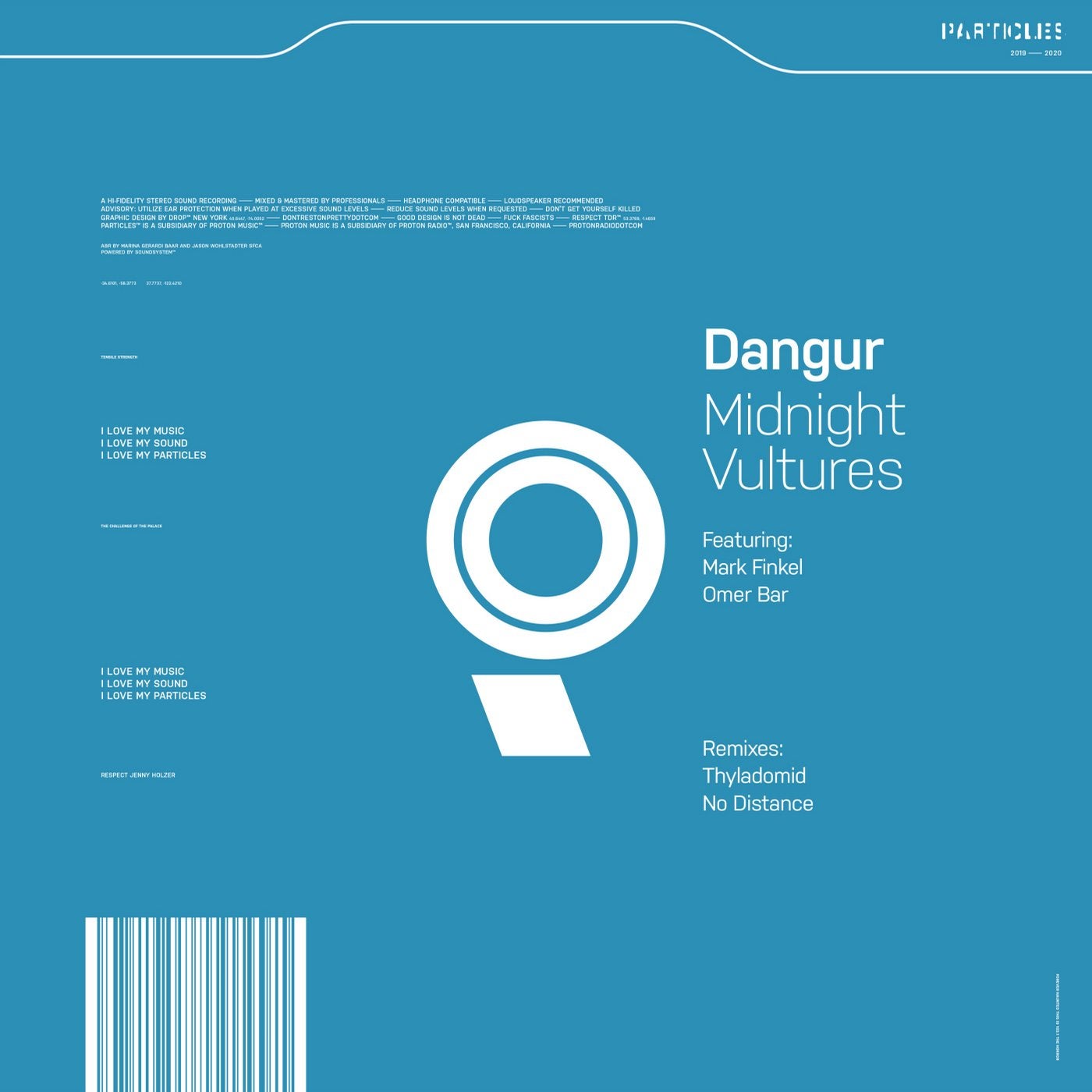 A new artist to the Particles roster, Dangur builds on a long history of success with his "Midnight Vultures" EP. Remixes come from German and Hungarian stars.

An artist whose continued rise to prominence throughout 2018 and 2019 has seen a life-long passion for music translated onto success on such labels as Klangwelt, Krafted Underground and Friday Lights Music, now make his Particles debut. The title track is an elegantly sculpted affair that bristles with atmospheric textures and sonic soundscapes before a heavy beat and delayed percussive groove add 4/4 familiarity. Breathy vocals and rippling arpeggio add power in the second half as do atmospheric piano and searing legato Moog lead. "Voltage Baby" opens with delicious rolling groove, syncopated bassline and prominent vocal treatment. A rasping open-filtered bass provides power post-breakdown as melodic character takes over in a dark dancefloor destroyer. Co-produced by Mark Finkel the smooth melodic interplay of "Bungee With Zeus", sees shuffling percussive intent combine with subterranean kick and woodblock groove. Rippling keys and shrill lead erupt into the third movement to create a beautifully melodious and understated offering high in technique and craft. A rich bassline underpins "Metal Beard" as open hi-hats and shakers add percussive intent. A rasping Moog lead provides Bodzin-like hypnotic intrigue and textured pads slide across the left-right spectrum with ease.

Renowned producer, Thyladomid, hits the ground running with his Particles debut. Regular on the likes of Doppelgaenger, City Life and Solomun's Diynamic, the German artist responsible for 2018's magnificent "Places" album for Traum, demonstrates his considerable production talent with a haunting and powerful reworking of the title track. Making full use of the vocals present in the original, the Thyladomid remix weaves a glittering array of detuned pads, off-beat percussion and hypnotic blips around a running techno bassline that drives relentlessly forward alongside heavy beat and characteristic production technique.

Hungarian duo, Peter Makto and Gregory S are no strangers to the world of underground dance music with a combined triple century of production credits to their names. Able to point to a catalogue of material that has seen them grace the likes of Go Deeva, Dear Deer and Hoomidaas, their own Truesounds imprint has also been a regular home for their work. 2018's "Purple Rain" EP saw an impressive Proton Music debut, while remixes for Michael A and Hot TuneiK completed the picture. Now featuring on Particles with their No Distance alias, the duo's remix of "Voltage Baby" packs a heavy punch with chest-thumping kick, rumbling sub-bass groove and subtle ticking percussion. Vocals from the original shine through before a shimmering lead-line in the second half picks up and extends on the melodic themes resonant in Dangur's original.

A quartet of original tracks from Dangur plus remixes from Thyladomid and Peter Makto and Gregory S, keep the "Midnight Vultures" firmly at bay.