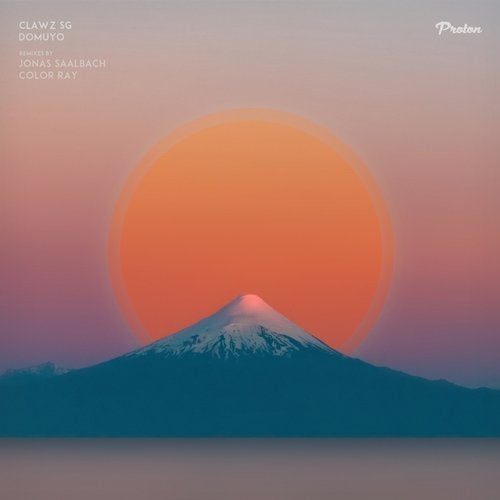 An artist finding a home for his music on some of the finest underground imprints including Traum, Natura Viva and almost a century of production credits for the globally renowned Steyoyoke, Sylvain Guiraud has been at the vanguard of the melodic techno sound for almost five years after a debut for Parquet in June 2014. Now debuting on Proton, "Domuyo" is a beautifully crafted affair, full of analogue melodic flourishes. Characterised by a dominant beat and ticking percussive groove, a rippling freeform motif evolves from the early stages into sublime sequence at the breakdown, full of emotion and nuance. A rasping bassline adds depth and character to the sonic collage to create a glorious and unique character. "Mauna Kea" continues the strong melodic narrative with a hypnotically shimmering motif revealing itself in the upper-mid frequency range. Simultaneously a raw bassline full of analogue power makes its presence felt in clever counterpoint, while a searing pad pulsates gently into the breakdown and beyond. A techno rhythmic framework adds aural glue in a work of genuine sonic beauty.

From the sprawling city of Pune in Western India, Shrinivas Sundar has shone like a beacon with his Color Ray pseudonym. Involved in dance music since the age of 15, a considered approach to his craft "inspired by guitar reverberations echoing in his mind", has seen a clutch of impressive releases for the likes of Electronic Tree and Juicebox Music, supported by Hernan Cattaneo and Sahar Z. Two remixes of Biologik in 2012 and Andre Sobota in 2016 have showcased the Color Ray sound and it is a pleasure to welcome him to Proton Music with a stunning reworking of "Domuyo" that glistens with hypnotic sonic beauty from the opening phase. Joined by a rich, pulsating bassline, a new lead line drifts across the upper frequencies before the track explodes into life with a striking dancefloor rhythm. Building in phases across a ten-minute odyssey, the infectious melodic and rhythmic framework is joined by a collage of accents that create a classy remix that is certain to find favour across global dance floors.

Cutting his teeth with DJ sets and live shows in Berlin's techno capital, Jonas Saalbach has found success across the global dance floors in such hotspots as Dubai and London. 70 production credits for Einmusika plus work for Bedrock, Kattermukke and Moodmusic tells another story of Saalbach's genuine talent and affable personality and it is an honour to welcome him to Proton Music. Taking a typically sophisticated approach to his craft, the Jonas Saalbach remix is a glorious variation on "Domuyo". Redolent in powerful rhythmic framework and hypnotic percussive groove, elements from Clawz SG's original flow across the mid-range while a raft of new production material oozes quality. Building elegantly to the mid-point, the track erupts into life at 3 minutes 30 with a new percussion melody to take the track on a new and vibrant path.

With volcanic power, "Domuyo" explodes into life alongside remixes from Color Ray and Jonas Saalbach.