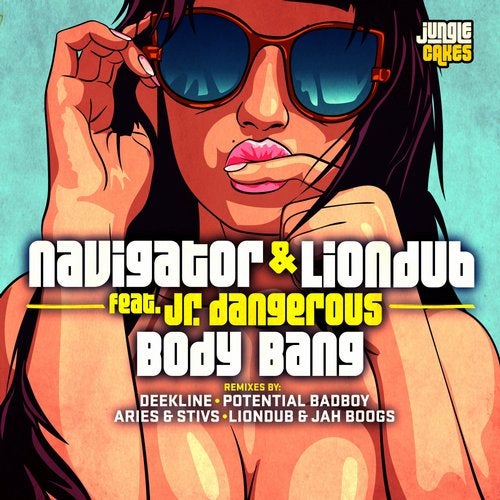 Jungle Cakes really have gone in with their latest release which not only celebrates a bangin' female body but also brings together a collective of jungle super heros. You're really spoilt for choice here as not only do you get the wicked halftime dancehall lick but a ton of remixes to suit all styles and flavours. Needing no introduction whatsoever and certified pre hardcore legends; Navigator and Junior Dangerous take full control of vocals from start to finish. Their infectious energy on the SM58 bust through the mixdown with full force and it's no wonder the likes of Potential Badboy, Aries, Liondub and Deekline have locked down some heavyweight reworks. Rough, tough and dangerous is certainly the inspiration behind Deekline's efforts which takes a stance of hard hitting beats and industrial basslines. It's got a certain 2012 feel to it which will no doubt please the real hard stepping ladies in the dance. Potential has a certain flair when it comes to remixes and this one is certainly no exception. The twisting low end wraps around the lead vocals perfectly, lashing out the occasional claxon and well recognised two step breakbeat. Aries and Stivs have certainly taken an obvious direction here and considering they are well known for flying the flag for everything authentic, you won't be surprised to hear a ton of mashed and chopped breakbeats. No doubt well approved by Navi! Liondub obviously not content with one version teams up with Jah Boogs for an alternative lick. It's as if they have taken the original, slapped in some beefed up breaks, turned up the attitude and sent it into battle. Fire for dem! Jungle Cakes are no doubt sticking with the formula of feel good, upfront vibes and it's obviously working in their favour. If you like your beats big and your lyrics even bigger, this one is for you regardless of the mix you choose.