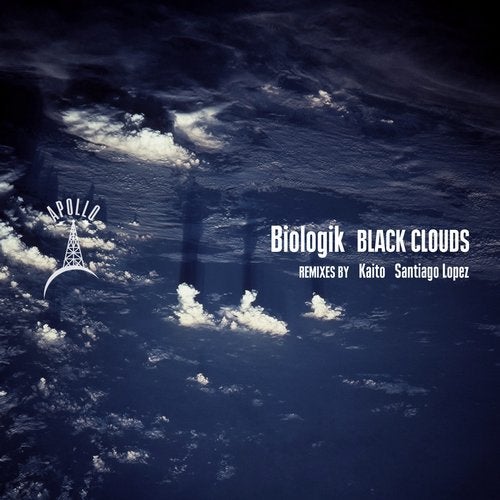 Biologik, Proton Radio founding father and Canadian master producer has had a year to remember. 2013 has brought about two full-length albums as the 15-track magnum opus, "One Month" hit the Proton Music catalogue in early January followed by the aptly named sequel, "Two" for Proton family label, Stellar Fountain in November. In between, original material for OLD SQL, Sleepless Nights, and Mesmeric have perfectly illustrated Biologik's considerable talents as he makes a welcome return to Apollo with a revisit to "Black Clouds" first seen on the "Skylab 2013 Fall 2012" compilation towards the end of that year. Reprised here, the deeply enigmatic atmosphere, luscious pads and soft rippling arpeggios combine to bring a resonance to the title as "Black Clouds" now receives two remixes from Kaito and Santiago Lopez.

Hiroshi Watanabe is a producer requiring little introduction. Under his Kaito production moniker, the Japanese artist has woven a rich and varied career for himself in a number of different capacities related to music. A graduate from both The Tokyo College of Music and the Berklee School of Music in Boston, Kaito's early career saw him provide music for computer game giant, Konami, before DJ appearances at New York Clubs, "Tunnel" and "Twilo". A number one US Billboard club play hit followed with a remix of Kimara Lovelace before a long and fruitful relationship with highly regarded Cologne imprint, Kompakt. Some 90 production credits have followed since a debut for the label in 2001 including multiple full-length albums and October 2013's tech house masterpiece, "Until The End of Time".

A remix in the shape of Artette's "Day Three" marked Kaito's debut for Apollo in December 2011, followed now by a return to the label with a magnificently accomplished remix of Biologik. A trademark approach sees Kaito's rich melodic interplay meander seamlessly across a nine minute oeuvre that bristles with crisp percussive dynamism. Motifs repeat, evolving as they progress, creating a multi-faceted and textured work of huge scope and presence.

San Francisco resident, Santiago Lopez is a producer inspired by his multicultural home city and motivated by the search "for the perfect musical balance". It is this love of the bay area that has seen him forge a considerable reputation as a club promoter as well as DJ appearances alongside a veritable galaxy of stars from the local area and beyond. A pair of tracks for Soulshift Music and the "Minna" EP for Progrezo Records represents the Santiago Lopez production output thus far but a three-track EP entitled "Red Sunset" has recently pushed deep house and techno boundaries for Apollo with its release in December 2013.

"Black Clouds" lift as Kaito and Santiago Lopez shine brightly across the landscape populated by Biologik and his evocative productions.