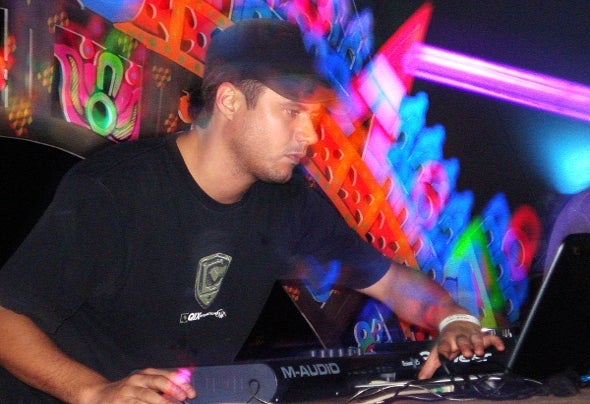 Whiptongue is Charles Cardoso Matos (Uberlândia - Minas Gerais - Brazil, 05 of November of 1978), was become involved with electronic music since 1999. Charles participated of a group that developed and divulged psychedelic trance in Minas Gerais and Brazil. Start as DJ in 2000, in the Festival Samsara, year where it started to dedicate to acquire it knowledge in the area of production of psytrance. His first project “Charivari” appeared in 2002, in which it had a music launched for the friends of local recorder Space Records. Formed a new project in 2004, the Ufologics, with Felipe Rossi (Tacit) and Vilar Luiz (Flood), live that it made great national success, having a music launched to the side of artists as: YabYum, Electrypnose, Arsenic, Stereographic and Ape, for recorder Innersound Records (Italy), V.A. Sound Safári, compiled for Dj Morus. It established the Sychotria in 2007, together with Flávio Blacksmith (Xpiral). They had been presented in the biggest better festivals and clubs of the parents, being launched 5 musics more than in you vary compilations for diverse recorders. However after 2 years together, Flávio now is dedicated to its Xpiral project and Charles still produces musics for the Sychotria, project that still has much what to present. Now loaded of new ideas, Charles develops the Whiptongue project (Looney Moon Records), influenced for new sources of psytrance, with sufficiently groove to bombar any dances floor.