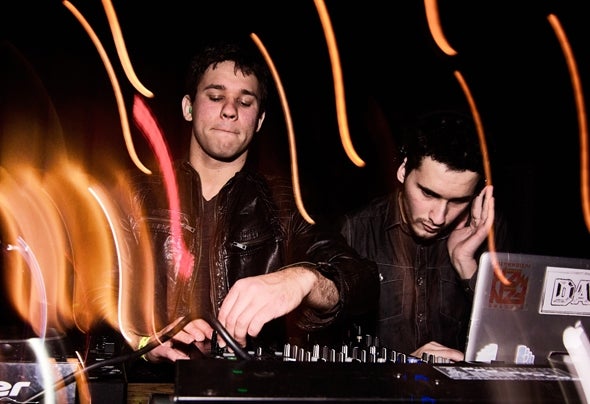 Paris Burns is a force to be reckoned with... T he brotherly duo, Dan & Alex, continually pushes boundaries with their aggressive bass sounds, hard hitting leads and intricate melodies that leave a lasting impression on EDM fans. Paris Burns is quickly on the rise and contends to be the successors of the electro house music scene. Fueled by the excitement and receptivity of their fans, the pair challenges the standard with their consistent quality releases. Dan & Alex (ages 24 and 21 respectively) have been producing a variety of electronic music for the past few years. However, in 2011, finding the EDM world lacking in darker melodic electro, the duo aimed to fill this void by producing heavy electro bangers that have an underground rave feel. With influences such as Uppermost, Wolfgang Gartner, Deadmau5 and Daft Punk, Dan & Alex cultivated their own unique sound and electro flavor.The Denver production/DJ duo gained momentum in 2012 by winning a slot in Insomniac’s Electric Daisy Carnival in Orlando, Florida. T he event opened up opportunities to meet and work with major artists such as Cold Blank and The Frederik. Paris Burns followed up this strong performance with their equally impressive EP, Raise Your Torch, released under Cold Blank’s label Burn The Fire. Raise Your Torch became a instant success: charting on Beatport’s Top Five Releases on Electro House. Equipped with remixes for James Egbert, Eva Simons and DJ Poet, Paris Burns ended the year with a bang, landing their mixes on multiple internet blogs and in fans’ libraries. With additional releases coming out on Beatport, Paris Burns is poised to make a name for themselves in the electro house scene.