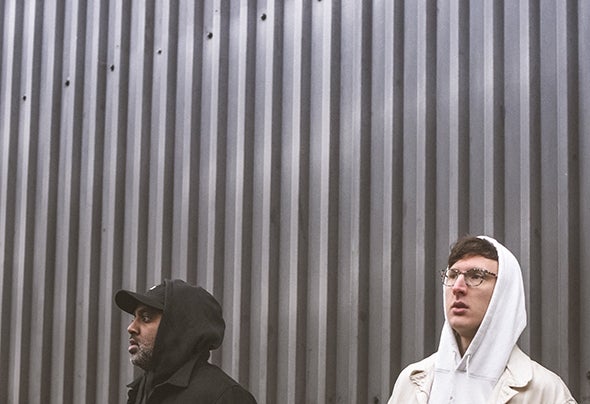 North London outfit Ivy Lab were brought together out of a shared enthusiasm for experimentations on the fringes of the UK bass music scene. The years that followed saw them go from strength to strength, earning a place in Mixmag’s Top 10 DJs of 2015 and propagating a new generation of hip-hop inspired abstractions housed within the framework of their 20/20 LDN project.Originally starting life as a trio, the duo of Sabre (Gove Kidao) and Stray (J. Fogel) now find themselves at the apex of the Halftime/Future Beats movement - a motley assortment of actors from across the bass music landscape applying their sonic-heritage to experiments with hip-hop and drum machine electronica.Ivy Lab invested further in the exploration of this sound with the creation of their 20/20 LDN clubnight. Housed primarily at Brixton’s Phonox nightclub, it earned the characterisation of “ultra innovative” (Timeout Magazine) and a “London standout” (Mixmag).Minted in late 2015, and borrowing the same raison d'être as its elder sibling nightlife brand; 20/20 LDN Recordings was unveiled with the pseudo- mixtape/compilation LP ‘Ivy Lab presents 20/20 Volume.1’ - described as “Uncompromising, insightful and rather awesome” 9/10 by Mixmag and “Impossible to categorise” 9/10 by DJ Mag. Little over a year (and only 5 releases deep) the label was awarded the title of ’Best Breakthrough Label 2016’ in the DJ Mag Best of British Awards 2016.Now a galvanising presence in the Future Beats movement, Ivy Lab’s’ 20/20 Volume.1 release and the subsequent follow up EPs were benchmark moments in forging the genre into a pillar of the electronic music landscape.Ivy Lab head into the horizon not only with an anchored presence at the cutting edge of the bass-music landscape, but also a secured reputation as pioneering label bosses and event promoters in ownership of one of the UK’s most exciting contemporary music brands.