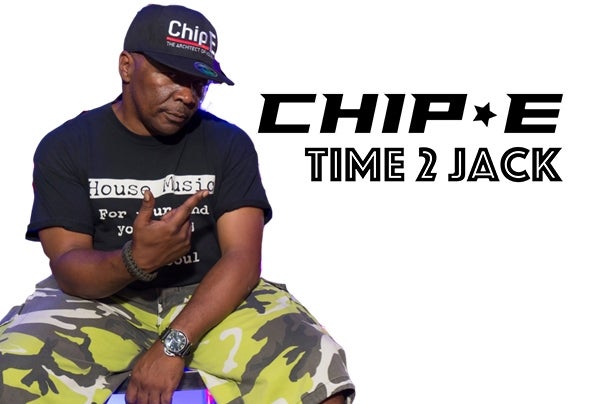 Born in Chicago, Illinois, Chip E. started his DJ Career in 1982 and by 1984 he was producing records. In 1985 Street Mix magazine declared Chip E. as the Godfather of House Music. In 1987, he became the first (and still the only) Chicago artist to be in regular rotation on all three major Chicago radio stations (WBMX, WGCI-FM and B96).Chip E. brought legendary DJ Frankie Knuckles from the turntables to the recording studio when he co-produced Frankie’s first record “You Can’t Hide”. Other artists Chip jumpstartedinto the music world were Liddell Townsell, KevinIrving, and Harri Dennis of The It.DJs around the world recognize Chip’s earlyrecordings of “It’s House” and “Time to Jack” as not onlythe blueprint for the genre of House and Techno but the first records to use the terms “House” and “Jack”. His first release “Jack Trax” is one of the most coveted early house music releases, fetching upwards of $1500.00 (USD) on eBay. By the age of 21 Chip E. was a worldwide name.Chip has produced a feature-lengthdocumentary on the subject of house music. The documentary is entitled The UnUsual Suspects - Once Upon a Time in House Music. In 2016 Chip began to produce musicagain, One of his highlights of the year was a 4 hour set at Berlin’s famed Sisyphos nightclub.In 2017 Chip E. Signed a license and distribution dealwith Universal Music, to reissue his old catalog ofHouse Music anthems and classics. Other highlights include performing at the Eyelife Music Festival in Havana, Cuba; The One Love Music Festival in Lake Perris, Ca;A hiatus in Australia to work on a Remix of his hit single“Time 2 Jack ” with the legendary Carl Cox, and Chipfinished up his year performing at various Clubs in Asia andthe Full Moon Music Festival in Pattaya, Thailand. In March 2018, Chip E. had the privilege of being selected as DJ/Artist for the 20th Anniversary of Ultra Music Festival in Miami, FL.On Saturday Carl Coxpremiered their newest song and Chip performed on stage.