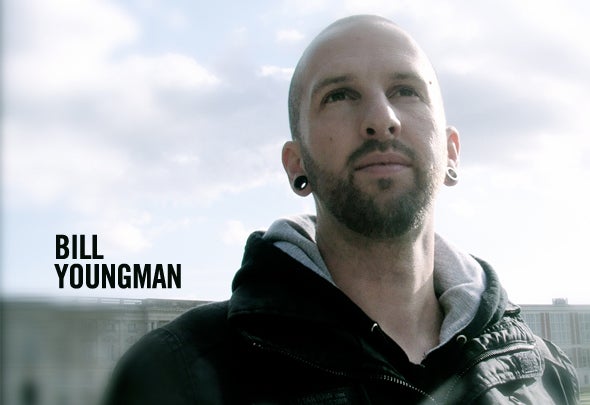 Bill Youngman Biography 2009 It's hard to put a finger on what Youngman does. He has been a soldier of the live electronic music scene since 1994. After countless years of musical training and drumming/guitar work Youngman found his passion for drum computers and analog machines. Whilst on the search for the perfect beat, Youngman moved to Berlin from New York in 2001 to further his outlook on the experimental techno scene and open up collaboration possiblities. On the way he's worked with and been inspired by musicians such as Jamie Lidell, Neil Landstrumm, Cristian Vogel, and Tobias Schmidt. He has composed numerous releases for various labels including Null, Tresor, and Scandinavia and all of his compositions are a result of being inspired by the times. For this artist, recorded material is the platform for expressing mutiple styles and new ideas. This carries over in the live situation as Youngman takes full control. Mashing up user-friendly classical techno feels, mental beat slicing, and keeping the floor shaking whilst combining a new-school, freestyle approach to electronics with mic in hand, verbalizing throughout, is but the only way one can in words described the Bill Youngman live experience. Although predominately known for his ability to shake any crowd into bits, Youngman has a full plate of collaborations, remixes and record projects (including his own "electrostep" imprint due for early 2010.