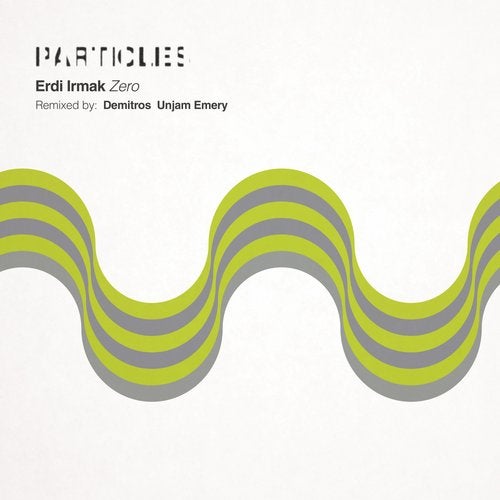 A master of his craft with a unique and dynamic approach to music, Erdi Irmak returns to Particles with brand new material. Two new original works and a pair of spellbinding remixes – "Zero" is a perfect ten.

Making full use of the cultural sounds of his Turkish homeland, Erdi Irmak's work continues to stimulate and scintillate with each passing release. From his studio on the banks of the Bosphorus, the Istanbul-based producer has provided a plethora of original and remix production material that has lit up the underground dance scene. Work for Movement, Balkan Connection and Stellar Fountain has showcased an impressive talent, while August 2014's "You're Either Guilty Or Not Guilty" album for Particles, saw Irmak hit the heights with a ten-track magnum opus.

Now returning to Particles after a 2017 remix of Sebastian Busto, "Zero" is a bass-infused percussive gem that revels in cavernous low end while an eerie suite of pads and haunting melody ripple across the mid-range. An additional growling bass makes its presence felt at the breakdown and beyond to add to the aural collage, while a series of white-noise effects add character and depth.

Lighter in tone, "Dive" finds its mark with thumping kick and stereo-panned percussive cadence. A rolling bass groove enters the fray with accompanying reversed melodic phrasing that wanders across the sound stage in dizzying fashion. A swathe of delayed-effects and rhythms provide interest in the stripped back breakdown, before hypnotic arpeggio and mellifluous melodies combine with rhythmic intent in the third movement.

"Awakening evolving minds" with his unique brand of musical craft, Brazilian producer, Demitros, from the south of the country, continues to build a name for himself through his deep and progressive house sounds. Making his debut for The Alien Gate in December 2016 with "Demogorgon", July 2017's "Cosmos" EP for Particles highlighted an impressive opening salvo for the label with a dark, high-energy, twin-track offering. Returning to the label, the Demitros remix sees a sublime glissando bass line that echoes the themes resonant in Irmak's original, as a clave percussive groove lilts its way across an eight-min offering. Using a host of additional production, new motifs cascade across the left-right spectrum and an intermittent glass lead plays homage to "Zero" with clever reinvention.

Both successful solo artists in their own rights, the collaborative partnership of Jeremy Calame and Emmanuel Hofmann has provided the duo with an incipient production career under the Unjam Emery moniker. Where "imagination and feelings are the values that bind us", the use of "organic" and "tribal" sounds have provided the Swiss pair with the debut "Sleepwalker", on Mark Slee and Atish's Manjumasi imprint for July 2017's "Six Swords VA" compilation. Making their Particles debut, the Unjam Emery remix takes "Dive" along a deliciously deep house path that glistens with shimmering character as the melodic refrains from Erdi Irmak's original drifts enticingly across the track's journey. A delicate percussive groove and tightly locked bass line supplies a dance floor dynamic and a wealth of additional production material takes the original in new and exciting directions.

Two new original offerings from Erdi Irmak and a pair of remixes from Demitros and Unjam Emery have seen "Zero" score full marks.