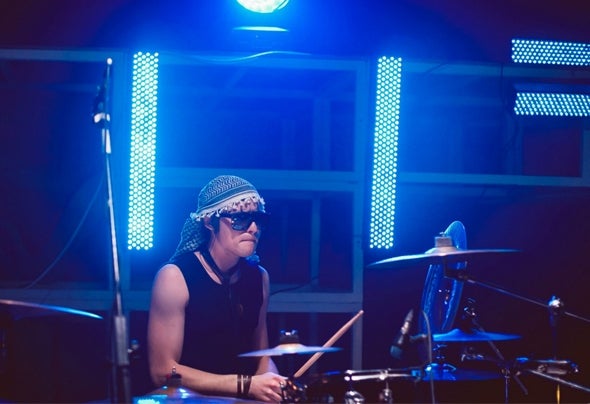 Flanger Drummer, real name - Vitaly Kuzmin , born - November 10, 1992 . It all started in early childhood. Small Acne already showed an interest in music , parents did not oppose passion son , sending him to the School of Music in flute. Trying to meet the expectations of parents , Vitaly faithfully attended classes and even participated in the quartet , which often took first place at the district and regional competitions. But the young man began to lose interest in the flute - it only helped him cultivate a sense of rhythm . If not for the perseverance of parents, young people have not graduated to become hated by the time the music school . But the reason for it was not the music , just her Vitaly had the warmest feelings , the whole thing was a musical instrument. Blow into the whistle he was tired of ad nauseam , he wanted to beat , drive and power that can give only percussion instruments, but at the music school of the faculty was not .... On it was the end , if not the case . fortune Something told Vitaly that happiness is somewhere nearby , he tried in vain to find yourself in the music , and then, finally, in the summer of 2008 , while walking with his brother , he was approached by two young men , and uttered the most important words in life Vitaly : a new rock band drummer required .... On this auspicious day , on a modest stage of local DC , Vitaly first picked up drumsticks , not to part with them for ever. Then many more surprised , seeing a guy who walked with drumsticks and tapped out a rhythm on anything that came to hand .... He shot drum batch of songs every day learned something new, and the result did not wait . first Steps A short time later Vitaly could begin rehearsals in the group and showed such ability that soon he was invited to participate in the concert , after which the boy was finally convinced that he is on the right track . He decided to become a professional drummer , period. But what to do next , how to develop ? Where to find a teacher to impact ? In today's world young inexperienced musician have to hack their way through very hard work. But Vitaly did not lose hope , for a start, he decided to expand the circle of acquaintances, gradually acquiring new friends - musicians able to give him some advice and share experiences . I do not want to learn, and want to play ! Life went on as usual , Vitaly was growing , and by the end of ninth grade parents are stunned with the unexpected news that he was going to Maikop to go to college and study to be a programmer . After a long long battles for independence , Vitali had to go to school. The outlook was bleak and joyless - endless days at a desk , night in the dormitory , and no bright future , if not two wands secretly Stuck with you from home . Soon all the hostel discussed news appeared among them drummer ! In the newly created student immediately made many friends , and the learning process has become a fun pastime . Normal student life began the day - classes in the evening - a rehearsal. new Hope Four months of training flew by , and then one day something happened that was to be expected - a neighbor in the dorm said Vitaly that in one of the city's universities there a rock band , and they are now looking for a good drummer. Naturally , the young man immediately contacted one of the members of the group , and the next day the meeting . The first impression was not Vitali very pleasant - he was met at the bus stop two young men as extravagant appearance that the boy was not alone . It was the bassist and guitarist , Artem and Sergey . In conversation it became clear that the group is well known in the city, so they need a professional drummer . Then everything went on as usual - the guys became friends , began rehearsing together . And it would be nice if it were not for the constant allusions new friends that Vitaly need to take a course of drumming , as the level of preparation is insufficient for the professional stage . Initially, Vitaly was shocked and offended , but eventually realized that his friends were right and started taking lessons from a teacher in percussion . Going to college was abandoned completely , Vitaly almost did not attend the classes, but it did not bother him at all - he decided to leave college to return home in Krasnodar, and prepare for admission to the College of Music , a course of percussion instruments. So he did, and has not lost - the selection committee appreciated his talent and gladly accepted the young man in the ranks of their students. As time passed, the boy gained experience , knowledge, rehearsing every day and are familiar with the musicians. Vitaly today - a welcome participant in numerous projects , he performs in several cover bands , and recently began to show himself as a talented composer and producer