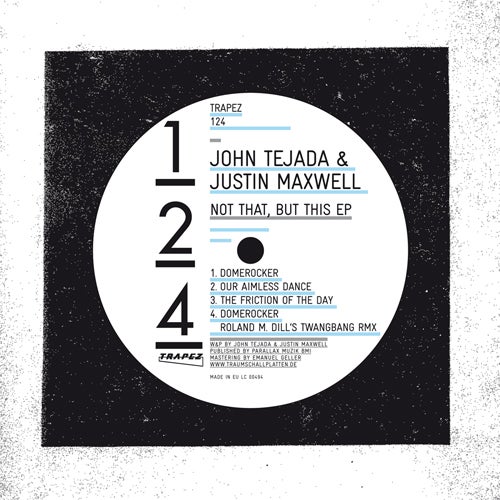 John Tejada and Justin Maxwell have been floating on top now for more than 10 years taking into account that an army of hungry music programmers have tried out every trick to motivate the masses and to become the new stars. John Tejada and Justin Maxwell can afford the luxury of not needing to do that, since they have written techno history.Their education which started with hardware in the earlier techno days... gives them the privilege to accomplish also this release with machines only. So you will witness 3 raw and beautiful tracks that activate our minds. Starting with Domerocker Tejada and Maxwell show us the world of warm sounding bassline, cool played chord sounds and grainy percussion... all melting together in what we call a soulful rocker. Time stands still and we think of our great smooth Trapez rockers from Jeff Samuels F-Cote over Donnacha Costello (aka Pleite) to Patrice Bäumel. Nod to today say hello to the past this funky groover puts a smile on our face.Our aimless dance starts out with a bit of a Chez Damier feeling, super deep and super steady but has these tiny squeaking sequences pulling in, an electronic treat that both like to sneak in to their music for some extra funk. Doing as little as possible is their strength.The friction of today is the so called bonus track. A hunting track that feels like a Morse code at first but than opens up towards melodic sounding blooming synth pads that bring back memories of super cool vintage Detroit Techno. This is a track for the ones who know.Roland M. Dills version of Domerocker emphasises the rocking aspect of guitars using here a slamming guitar chord as the alpha element leading us through the track into unknown territory.It is certainly the world of Dill: austere, dedicated, with more compositional skill than most artists can handle. But the rock influence is new, as he himself said in discussions with others, that he liked the idea of touching that territory, so he took a chance and did it! What we end up with could be a modern sort of Profan track. Straight and compressed as carbon, edgy and demanding and dry... this is a true Cologne track and therefore a true "Domerocker".

Not That, But This EP