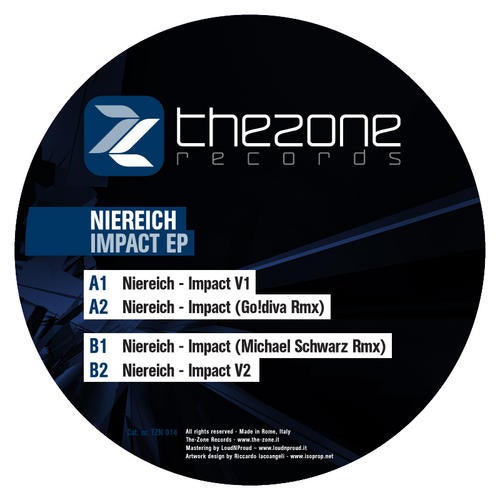 The Zone Records fourteenth release is, unsurprisingly, the calibre you have learned to expect from Italias No.1 hard hitting and forth right techno label. Hard hitting is apt, as its another way of Saying Impact, Niereichs new release on The Zone Records. 2010 saw Niereich break into the techno scene in a big way with his no-nonsense style of pounding kicks, hissing percussion and grand spatial sound settings. Impact sees Niereich offer two original but distinctly different versions of the title track Impact, and sees him joined on the release by no less then Godiva and Michael Schwarz, providing some quality reworks of the original. Impact V1 immediately gets to work on your aural synapses with immense sounding industrial style hisses which toy with the minds mental picture of this futuristic sonic strain. With a rising siren throughout this is sure to cause cerebral chaos in even the most dedicated techno listener. Impact V2 bangs big from the get go, again steam releasing Niereichs signature hisses over fat kicks and crispy percussion. Well-crafted synths collide to create a track fit for space travel or getting a dance floor ripe for some hedonistic mayhem.The remix by Michael Schwarz is bound to delight the bass hungry with his relentless rework of Version 1 whilst Godivas take is pure filth embodied with its distorted synth lines and colossal tones.