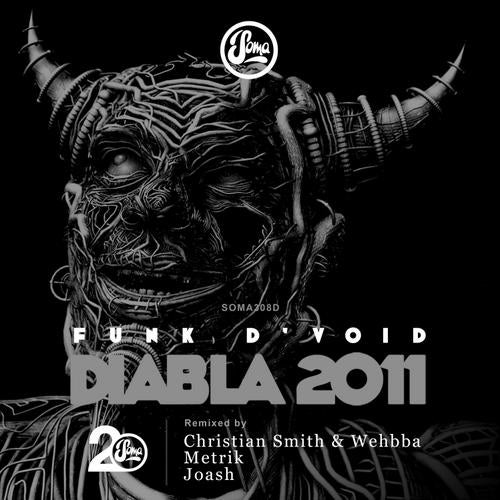 
The fifth EP from Somas 20th Anniversary series provides three incredibly different reworks of the classic Funk DVoid track, Diabla. To date Diabla is one of Somas biggest tracks. Back in 2001 it was caned by everyone from Laurent Garnier to Dave Clarke to Pete Tong, and was the archetypal closing track in so many DJ sets. Whatever the case, it is a true representation of Techno from the turn of the century, and an undeniable classic. At the time it was reworked by The Hacker, Samuel L Session, Kevin Saunderson, Octave One, and of course, a certain Heavenly rework by the man himself. In 2011 we revisit Diabla with Christian Smith and Wehbba, Metrik and Joash who provide 3 very different, but equally brilliant remixes.

Appearing on labels such as Drumcode, Bedrock, Sci+Tec and Renaissance resulted in Christian Smith having exceptional success in 2010/2011, while Wehbba has been following suit, working with the like of Tronic and 100% Pure. Following the immense hype over their last collaboration, Laurent Garniers Flashback, they come together again to remix Diabla.

Next Viper Recordings' Metrik steps up to rework Diabla. Ten years on, Metrik amps up the tempo, trading in the 4/4 for one of his trademark punchy breakbeats. A razor-sharp, LFOd bass-line and intricate drum programming combine to create this Drum and Bass monster.

Joash, who has just released his debut album on Compost Records, takes influence from his deep passion for Electronic and Classical music. These influences shine through on his Diabla rework where he produces a powerful orchestral masterpiece. He proves his out-standing musical talent, incorporating several cross rhythm sections to transform Diabla and merge music boundaries.