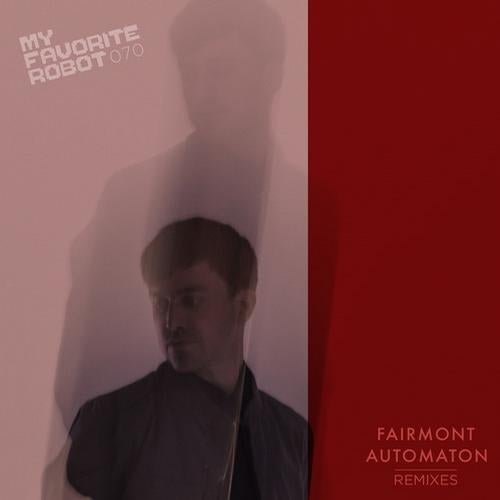 The My Favorite Robot label hand over the parts from Fairmont's superb recent album 'Automaton' to the likes of Ewan Pearson, Ryan Crosson, Undo and Arthur Oskan resulting in a very special remix package... Jake Fairley AKA Fairmont has been pioneering forward thinking electronic music for well over a decade now, working alongside heavyweight labels such as Border Community, Traum Schallpletten and most recently My Favorite Robot Records who released his third artist album November 2012. The LP, 'Automaton' receivedbroad critical acclaim with praise heaped on it by publications such as Mixmag, DJ Mag, Groove, Tsugi and Faze magazine and select cuts from the album began to show up in the charts of a number of leading DJs. Now Fairmont & My Favorite Robot Records have decided to collect together a series of remixes of some of the leading lights from the LP, reworked by some of their favourite producers, the results are here on 'Automaton Remixes 1' with a 2nd remix package scheduled to follow later this year. The EP kicks off with 'Last Dance', a key cut from the album which now gets overhauled by remix heavyweight Ewan Pearson. Pearson's remix credentials needed little introduction having been a go-to man for the likes of Depeche Mode, Metronomy, Hot Chip etc as well as numerous dance acts. Here he takes 'Last Dance' and works it into an epic ten minute electronic anthem as only Mr Pearson knows how, simply stunning! Following hot on his heels, Ryan Crosson picks up the remix baton and sets about transforming 'Alkaline' into a brilliantly understated slice of leftfield techno with a light and airy feel to it. The third mix sees Factor City's Undo remix 'Fate', turning in a slo-mo electro influenced piece of electronica that marries Fairmont's song structure with some intense and moving production. The penultimate mix sees recent MFRR convert Arthur Oskan gets to grips with 'Tiny Diamonds' delivering a remix that pulses and purrs with it's arpeggiated synth lines bringing a truly uplifting quality. Finally we close the package as we started it with remix overlord Ewan Pearson delivering an instrumental version to sit against his remix. With the recent Jori Hulkkonen remix package fresh in the memory and now this stunning selection of Fairmont mixes it's clear that My Favorite Robot Records are becoming very adept at picking the right remixer for theright job. 'Automaton remixes 1' is a must have collection for all lovers of quality electronic music.