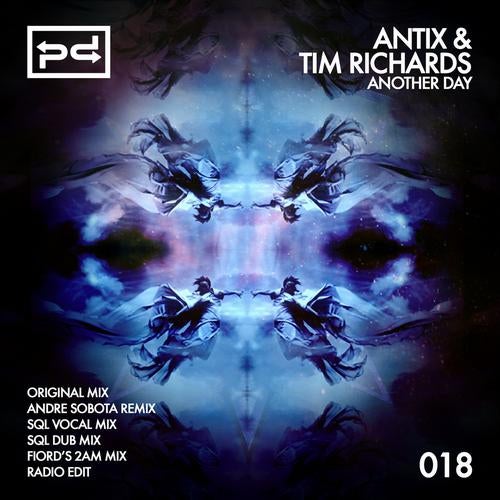 The 18th release on Darin Epsilon's Perspectives Digital sees frequent studio partners Antix and Tim Richards teaming up once again for a new single. The New Zealand based trio have worked together in the past with spectacular results on Flow, Iboga, Detone, and SIlence Through Music. Their first studio production for Perspectives is a vocal project entitled 'Another Day' which includes remixes from Andre Sobota, SQL, and Fiord.
The Original Mix begins with a tight, floor-friendly house groove that's accented with sparkling electronics and enchanting harmonies, which deliver an amazing atmosphere early on. The highlight of the production though is a charming vocal which provides some enticing hooks, along with dynamic range that is sure to have the full attention of your dance floor.
The first remix on the package is supplied by Andre Sobota, who is making his first appearance on Perspectives. The Brazilian producer has been crafting some of the most musically inspiring progressive house for the last 2 years. Andre's remix of Coldplay & Rihanna's 'Princess Of China' was picked up and played by Pete Tong on BBC Radio 1 and then subsequently released on EMI. Following that, Andre's two tracks 'Voyager' and 'Found' were signed by Eric Prydz for release on his Pryda Friends label. Further releases on Toolroom and microCastle capped off an incredible 2012 for Andre, and with his remix here, he's gotten 2013 off to an amazing start. Andre's taken all the amazing elements from the original and transformed them into his own progressive techno hybrid that's full of the soul and emotion we've come to expect from the Brazilian producer.
The second interpretation is provided by SQL, who is also making his debut appearance on Perspectives. Pim Van Horssen aka SQL is a Dutch techno / tech house producer whose pristine studio skills are well documented with releases on GEM, Get Physical, and Form. For his 'Another Day' interpretation, SQL has crafted an irresistibly funky groove that is perfectly accented with smooth melancholic lines, subtle acid hooks, and a great twist on the vocal elements from the original.
The final remix on the package comes from Antix under their more tech house oriented Fiord guise. It rounds the package out nicely with a cool and contemporary club vibe. The rolling hypnotic rhythms, hook heavy stabs, vibrant drums, and captivating vocal loops provide a stunning hypnotic element to the piece. Look for this one to go down as one of Fiord's most infectious creations to date.