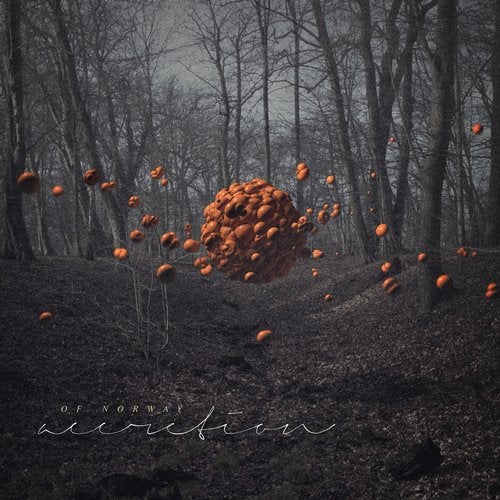 Ever since we first got together in Oslo to produce music under the Of Norway moniker in 2006, we had dreams of producing a cohesive body of work rather than just single tracks and EPs. Following a few 12" singles on Connaisseur Recordings in 2011 and 2012, we got to talking to the label about producing a full length album. Two years later we are very proud to present the completed 'Accretion'.
We chose the album title 'Accretion' (def: "Growth or increase in size by gradual external addition, fusion, or inclusion.") as we felt it applied to the entire process of recording and writing music. We start out with one sound or melody and build upon that by adding more and more layers. And it's something that quite often is refected in the structure of our tracks. Furthermore the title applies to how the album came about, in the sense that we started off with the title track, which defined our sound and we kept building around that until we had a solid body of work.
'Accretion' was not an easy album to make, as it is our first album and uncharted territory for us. We both had the idea that the album should not just be a collection of random tracks, but rather more a little documentation of our lives, and something personal. This made it doubly difficult, since it also exposed us as people and not just anonymous producers.We wanted to play as many of the instruments as we could ourselves, not relying too much on loops, samples and programming machines alone. We opted for more dynamic instruments and outboard gear, in conjunction with some loops/samples and sequencers. Not that we shed away from groove based sequencing totally - we used the Native Instruments Maschine to great extent, for instance - but we wanted to try to get more expressive and personal, and thought we could achieve this by mixing it up a little. Chief among the instruments we've played on the album is the Fender Jazz Bass, various guitars, percussion instruments (anything from wood blocks to the Korg Wavedrum), and some synths like Moog Slim Phatty, Waldorf Blofeld, Korg DSS1 and so forth. Not to forget the help we've gotten from our vocalists, who've put their unique signatures on some of the tracks!
This was all quite time consuming and challenging, but also very rewarding. The album showcases productions from the very organic and almost entirely acoustic works to long, trance-inducing pieces that take your mind for a ride if you let it.The end result being a mix of moods and personalities and a glimpse into our lives at a period of time, which is a scary concept to present to the world, but sometimes you just have to jump out in the deep end and hope you stay afoat.
We are both very proud of our debut album and hope you enjoy our 'Accretion' as much as we do.
Much love,
Vegard Wolf Dyvik & Carl Christian Steenstrup