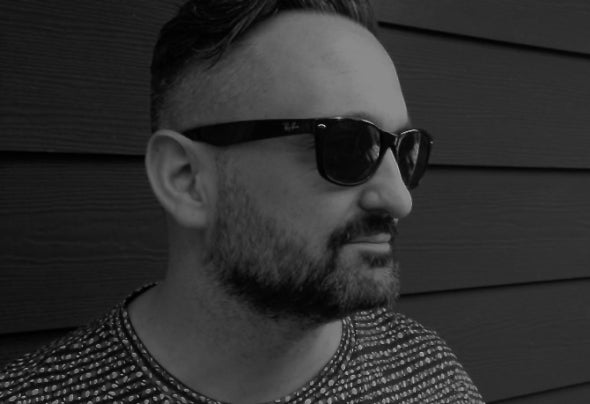 Making the move from a hip hop listening skateboarder in New York to a house music producer in the creative arts mecca of Asheville, North Carolina may seem a stretch to some. For J-Hecht, born Jason Hecht, it’s just a natural progression in his musical journey, taking him not only to new places geographically, but also to varied genres, styles, and sounds. Jason first took notice of music as a teenage Black Sabbath fan which, with help from his skateboarding buddies, progressed into the worlds of EPMD, Big Daddy Kane, and Public Enemy. It was in the early nineties that Jason noticed some of his fellow skateboarder friends mixing records on turntables as well as attending New York’s earliest rave parties. Fascinated, Jason was soon hooked on acid house and techno and became an enthusiastic supporter of the city’s flourishing electronic music culture.However, the repeated nights of constant, obsessive raving took its toll, so Jason eventually decided to t ake a break and wind t hings down a bit . However, he still wanted to be involved with the electronic music scene even if not as an active party-goer. This inspired Jason to get behind the decks himself, spinning mainly Breakbeat and House Music, and learn the basic ropes of audio production.After more than a decade of slugging it out in New York’s house music scene, J-Hecht found himself in need of an inspiration re-injection. This unexpectedly came from a move to Asheville, North Carolina a few years back. With no intention to stay immersed in dance music, Jason was soon mingling with local artists, musicians, and DJs and caught the bug once again. “I guess the music found me,” he jokes. Reinvigorated, J-Hecht took to the decks once again.J-Hecht has also reemerged with a new focus on production work. Working a style that evenly fuses tech-house and minimal sounds but with a funky influence (probably taken from his past love of breaks records) J-Hecht has been knocking out club-primed tracks. In addition to releasing tracks on Electrik Soul, the label of Jason’s old friend Onionz, J-Hecht has hooked up with the innovative Release Musiq imprint. Based in Asheville, this new label draws upon the creative vibe of the city, issuing music meant to resonate within the clubs in unique ways. He has also hopped on board, Kushtee Deep(Spain), a label that has been getting a lot of worldwide attention. Jason also has released on Fierce Animal Recordings(San Fran) Night Child Records(NYC), and has a scheduled release on Get High Music. Every step is a sign that Jay's best dancefloor moments are yet to come.