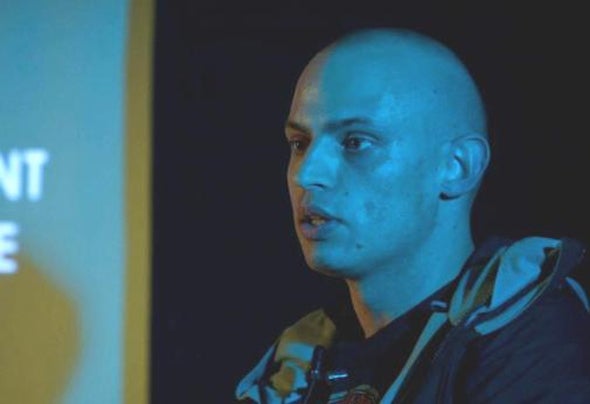 Ivan KomlinovicBorn 22nd of June 1976 in Zagreb, Ivan was connected to all types of music since early childhood. Since he was 13, he's been deeply interested in development of Hi-Fi electronics and a frequent guest in most of the specialized stores and local Hi-Fi fares, building up his knowledge and becoming a competent critic. He got into the world of electronic music in the beginning of the 90's (in that time as a part of very narrow audience and without previous musical knowledge) and simply fell in love with new way of communication in and through music. His encounter with DJ profession happened in 1993, when he stood behind a home-made mixing surface for the first time and came across the term beat- mixing. Through his first, unselected record purchases he got to know most of the sub-styles in electronic dance music and out of the whole selection, Ivan completely found himself in various styles of techno. Years of intensive observation and following-up of the whole scene, combined with hundreds of hours practicing mixing techniques and all kinds of DJ exibitions, finally pushed him to develope his own perspective toward electronic music, with very particular way of its presentation.Judging by music style he's a techno DJ, but alltough the majority of his set is techno oriented, he often plays new skool minimalistic techno/house tunes, considering cronological or style boundaries to be boring and outdated. That's why he doesn't think much of the DJ's that always and for hours and hours play the same or similar limited sound.He's not liable to fullfill wishes of audience while «working» on the set, but his goal is to animate the audience with music and approach that are apropriate in the ambient itself, the mood and his own impression of the moment. He never makes the set in advance, but keeps several rules in mind, rules that are differently presented on every occasion: every show has to have its introduction, culmination, plot and disentanglement.Today he is definitely one of the leading artists at Croatian scene. Ivan’s DJ set is journey through techno styles builded arround strong musical base and his lively improvisation. Technical skills helps him to add even more dynamic to his musical approach when needed. His tracks has been released on labels such as In-Tec Records (Carl Cox's label), Wet Muzik, Laus Records, BM Slim, Omegaritam Records, Eskape Records, Subconce Records, 4 Season Music, Decoded Music, Work Hard Play hard and so on...Ivan played on parties with DJ's like: Carl Cox, Jeff Mills, Dave Clarke, Laurent Garnier, Claude Young, Derrick May, Oxia, Thievery Corporation, Gus Gus, Faithless, Craig Walsh, Plastikman, Billy Nasty,Green Velvet, Umek, Valentino Kanzyani, Jack de Marseille, Joris Voorn, Mr.C, Marco Carola, Alex Bau, La-Di-Da, Misjah, Trevor Rockliffe, Tim Taylor, Samuel L. Session, Deetron, Thomas Schumacher, Funk d' Void, SLAM (live), Rino Cerrone, Kelly Hand, Aril Brikha(live), Marko Nastic, Dejan Milicevic, Colin Dale, DJ Bone, C1, Ben Long, Jel Ford, Simon Coyle, Phil Kieran, Alexander Kowalski, Jean-Marie Kone, Pero-Fullhouse, Haris, Colin Dale, Chris Finke...Today, Ivan is busy with his studio busyness, as a writer,producer, remixer, mastering engineer and soundengineer too. His other job is sound design and audio engineering at oldest croatian motion picture facility.