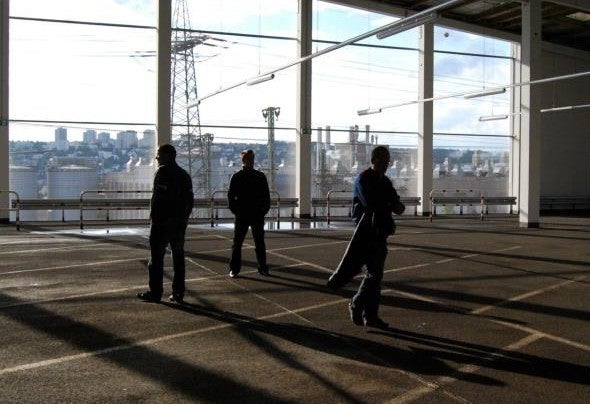 Fogmountain sound system is the trio of three e- musicians Florian Breidenbach, Daniel Schroder and Frank "Accentbuster" Wirth from Fulda. Florian and Frank both working as DJs knew each other from their youth. After an extended period without contact, they met again in the late 90s as young adults and soon realized that they were connected through more than very similar musical interests. At that time Frank already produced electronical dance music in most of his free time. This way also the first common productions began and even the name "Fogmountain" was used in public for the first time. Previously thought as a possible name of an own (vinyl) label, the name was now used as the title of the website that accompanied the commonly organized, musically designed techno events.In 2002, they met Daniel Schroder while still studying and quickly realized that they had more in common than the love to electronic music. Moreover, the three became friends, which remained on student life to working life. Just about the steady musical exchange between them a collective of artists was created which was able to capture the musical ideas and their elaboration symbiotically and finally combine them.The album "Bamaolo Moods" is their first conceptually composed album that blurs the boundaries between chilled-out, melodic, progressive and technoid house music. It is a sonic journey with many facets and is supposed to primarily transport one thing: holiday atmosphere. The release date is 09/17/2012. Publishing label is "Desperadoz Records (Chilly Con Carne Edition)", with no other than remixer, producer and techno DJ of the first hour Mario de Bellis. Before publication the second track of the album called "Your Moody's" already announced its great potential, and found its way into DJ sets from DJs such as Jody Wisternoff etc. Furthermore, four of the tracks were already licensed for various House compilations before publication.