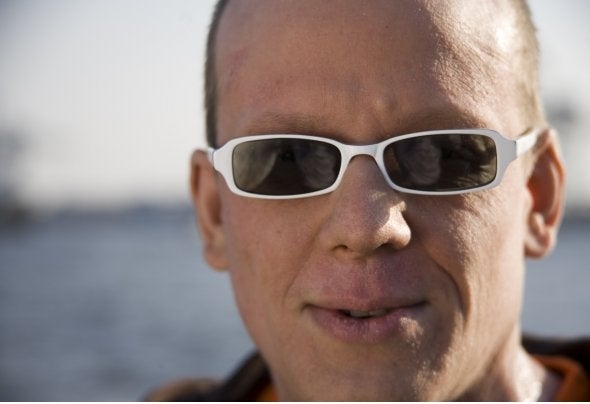 Frank Wirth started producing in his childhood by programming t he SID playing "Michael row t he boat ashore" in BaSIC on the c64. Then he realised the possibilities of AdLib sound cards and sequencing, after that (in the year 1992) he achieved a small synth with MIDI and his stepfather gave him an atari with cubase for sequencing. He was so astonished about the possibilities of making music that he, from this day on, spent every free time and money to discover new soundscapes or to buy new synthesizers.It was also the year 1992 when Frank had his first contact with techno music, but it took one more year for a deeper touch. In 1993 he fell for the acid- and hardtrance music that was played mainly in the clubs in Frankfurt am Main and by this way also was played on the famous radio transmission "HR3 Clubnight". It was nearly the same time when the Cosmik Space Club and the Generation Rave party series in Fulda were causing a furor and by this way hardtrance and rave music became sociable locally. This was caring for some good friends and a posse around Frank which was strongly interested in making and playing techno music and organizing techno events. From this time on, he never got rid of the "virus" techno music.In 1995 he additionally started with deejaying according to the big mid-90s-re-acid-wave. So his first sets were full of straight homogen sounds out of the (most) legendary technoid roland synths. It was also the year 1995 when he met up with a new party posse called "Genetic Fusion"and in the following years besides mixing at the decks he had his first live performances with a set of hardware equipment on the "Underground Level" Parties.In 1996 he achieved the real silverbox, after he had tried out different clones of that incredible synth. He really did taking this synth to the toilet when he went there, continuing programming basslines :-) From this time on he continued in a two-soul-way. On the one hand he loved to produce hard and very straight and minimal acid t racks and on t he ot her hand he continued moving through trance soundscapes and melodies. More and more, his own style and kind of sound was formed. It was some kind of minimal with sometimes pure acid sound and sometimes very sphery bell-like trance sounds. Caused by that and by the fact that he started working together with many friends on music, he had to create more and more projects.It was the year 1997 when he met up with the DJ Suzy Skyy, who was leading the local record store and the DJ Daniel Merz, who was also very productive at this t ime. In t his t ime t he name "Fogmount ain" appeared the first time. First it was thought as a record label for the local artists (some promo material was released on tape and cd), but later on it was decided as name for the movement that came up when Frank and also Daniel Merz joined t he Beat Cave t eam wit h Axel Seidel and Florian Breidenbach.In the year 2000, after he had finished his school and was preparing himself for studying, he had the most productive phase of his life so far. Since that time he take up his study in Applied Computer Sciences (with focus on media computer science). This has brought him his ambition to produce tracks in the VST- environment .It was also the year 2000 when his DJ sets became harder and more rhythmical oriented and after that, his productions also became harder and somehow the typical acid elements disappeared. They were replaced by minimal sounds and additional drum loops. After having produced many of that "advanced" tracks he found back to some acid elements in 2005. After that he started some new projects with Florian Breidenbach, who had become his best friend during the years. His preferred music style then changed to Tech House and Deep House, but besides that he continued producing Hard Trance and Ambient lonely and together with some other friends.T oday he is producing his t racks in t his 100 percent software environment. Since his beginning he has moved through different styles of techno music: Rave, Trance, Hardtrance, Acidtrance, Acid, Ambient, Hardtechno, Electro and House. As one can see, he does not like to commit himself to one explicit style.Since his beginning of making electronic music he has finished hundreds of tracks (nobody has really count them so far). A nearly complete project list can be found here. Milestones were the Squares Project, Horus (& Friends), J-Sphere (formerly called Djaysphere), Innerself Pilots (together with the drummer Martin Goeppner), Watercourse, Raminado, March and t he Barkeeper (t oget her wit h t he DJ Daniel Merz, who unfortunately died in a car accident), Mickey Blue Ice, SIDrecycling, Sphereforce (together with Marko Schlieder aka Chilled Forces), SOJUS (together with Dennis Wolter aka Volta), Accentbuster and of course Fogmountain Soundsystems and Fogmountain Bootleg Subsystems projects (both together with his friend Florian Breidenbach).