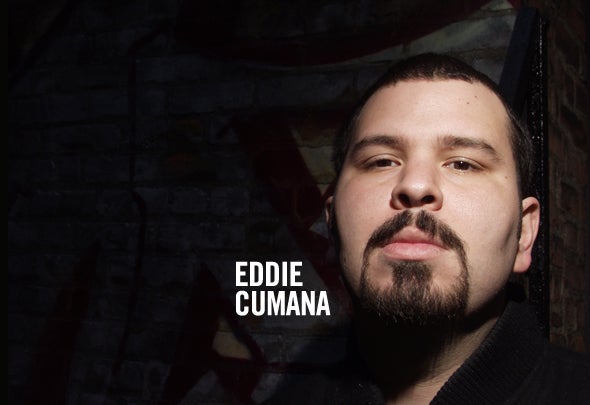 Eddie Cumana KULT Records is one of the most successful New York based underground Dance labels and its co-owned and operated by nuyorcuban groove prodigy, Eddie Cumana. With over 20 years of experience in the music business as a sound engineer, record label executive, song-writer and professional DJ and producer, Eddie's sound is thunderous, progressive and driving. While Eddie was already a seasoned dj and a fair music producer, he entered the business side of the Industry as one of the original staff members King Street Records in 1993. After a few years at the label, Eddie and partners opened a commercial sound studio where he worked as the house engineer and technician while spinning and producing at many underground Clubs and labels. After several successful years as a Studio Owner and adding additional skills to his repertoire, Eddie's career brought him to work for KULT Records where he became the label Manager in 1998. Kult Records was quick to recognize Eddie's multi-faceted talents and encouraged him to bring his cutting edge hard hitting production to the table to be the producing force behind the multi-Artist Act Dynamix who became an instant households name. Dynamix burned the airwaves with the Act's debut single, the now classic "Dont Want Another Man" featuring Tina Ann; Every one of Dynamix's following releases was a major success and Eddie went on to scored Multiple Number 1 billboard records/and various best record of the year IDMA nominations . Today he keeps creating the hottest music that is being broadcast on radio mix shows and spinning internationally on dance floors alike under his name or the moniker Dynamix. Eddie is behind the co-writing and the production of last year's underground smash by LULA and ALAN T entitled "There Is Only One" which gained support from Danny Tenaglia to Erick Morillo to Danny Rampling and was ailed as the biggest Record of the year by many. With hundreds of well estabilished releases to his name, having executed official remixes for top talent as Pink, Toni Braxton, Cindy Lauper, Natasha Bedingfield to mention a few while creating original productions for artists such as Cissy Houston, The Sweet Inspirations, Lula, Alan T, Sabrina Johnson, Sweet Sensation, Amuka, Inda Matrix, Michael Watford plus many more while spinning internationally and running the Internationally respected power house KULT Records, Eddie has risen to the top through his hard work, passionate dedication and regenerating himself as an artist, producer, song-writer, DJ and a Top label executive.