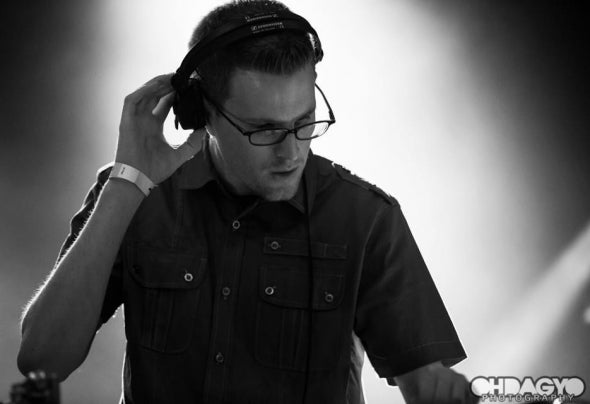 Dip Vertigo (Jeremy Matthew Eichberg) a.k.a. Dip, discovered a new talent in 2003. Having studied many instruments throughout his life, such as drums, piano, clarinet, sax and receiving a bachelor of music degree in vocal performance, for opera, Dip turned his musical interest to djing. With his eclectic mind he began spinning many different genres of electronic music, his favorite being drum n bass. Known for his quick symmetrical style of seamless mixing, on three to four decks, and his high energy track selections, the world has also become a custom to him picking up the mic. For the past eleven years he has been spinning, mcin’, and singing at drum n bass and dubstep events. He has put out several solo dnb mixes including “King Me,” “Checkmate” and his most recent mixes “Beneath the Shadows II” and “Bassology Promo Mix Vol. 1,”. In the realm of dubstep mixes you can find “Another Dimension” and “Occupy This.” In the past Dip was known as one half of Maximum Moves with MC J-Tec. Maximum Moves, a project put together by world renowned artist MC MC, put out several mixes and made multiple appearances in L.A. including Monster Massive ‘06, Legendz, and History III as part of Grapevinez. Since then, Dip has gone onto play direct support to Andy C, Noisia, Dirtyphonics, Bailey, Loadstar, Infected Mushroom Live, Feed Me, Dara, Optiv, Document One, Terravita and has shared the bill with many more and he will be making his first festival debut at EDC Vegas 2014. He is also in his tenth year of spinning his internet radio show “Electrical Impulse” Tuesday mornings on www.dnbradio.com, and he holds a dj residency at “Bassology” in Orange County and both Timeless DNB and LA Beatdown .Production has now taken over his life and has become his main focus in a world where just being a dj is not enough anymore. He was recently signed to Bell Ringer Records which will be releasing his highly anticipated debut EP “All This Love” in the spring of 2014. In 2012 he released his operatic dubstep banger “Play Dirty” with Obsidian & Meliss FX, featuring himself on the vocals. Dip’s current projects consist of collaborations with Atlantic Connection, Dknow (MC Dino), David Hiller, Dave Owen, Divine Elements, Produce & Destroy and more, both singing and producing.As if djing and producing didn’t fill up his plate enough, Dip is also a well respected promoter in Los Angeles. With his partner Solomon Baldeo aka Neuropunk, the two founded LA Beatdown, a truly unique, next level bass music phenomenon, and Timeless DNB, a premiere drum n bass monthly in its seventh year. The two have big plans for the future and continue their quest of providing a unique flavor to the bass music community and beyond.Dip Vertigo’s first love will always be drum n bass, but he plays it all...dubstep, electro, house, minimal house, tech house, jumpstep. His passion for djing has never wavered. It is the same as it was when he first started eleven years ago, and his passion for performing has been with him since he was born. Whether singing opera, performing in choirs or rocking edm stages worldwide, one thing is certain....Dip is here to entertain!   Artist Bio