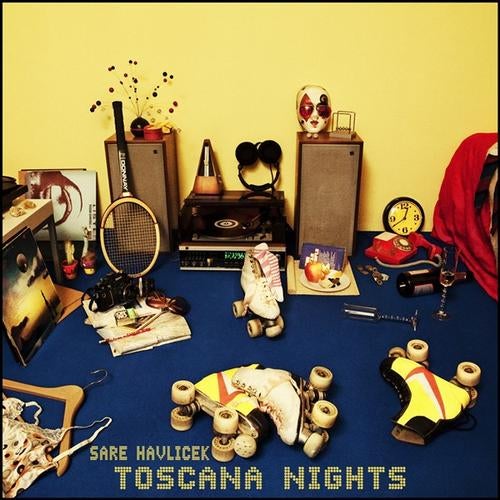 Slovenian based Sare Havlicek is a bit of a hoarder. A hoarder of old synthesizers, drum machines and most of all 70's and early 80's euro/cosmic disco sounds. A trip around his luxurious studio is a bit like a day at the synthesizer museum. Throw in some liberal doses of Adriatic-disco and early 80's Shalamar vs Shakatak vibe then add a sprinkling of magic fly and long, lazy, girl-on-arm coastline days. Bake for a year or so and 'Toscana Nights' the album pops right out.

And so to the music.the album's lead track 'Toscana Nights' opens up proceedings with a killer lead line and Sare's trademark pulsating 1/8 note synth-bass groove. Studio 54 would have loved this track. Next up is the sunshine anthem 'White Russian' dripping with kitsch, sweetening strings, cocktails and sunglasses in equal measures. Then it's onto 'UFOs Are Real'.or are they? Ask the Media.

The album features the catchy vocals and snappy lyrics from US Import, Hannah Mancini. You can hear her add her slinky sheen to the vocal tracks 'Dreams In Light', 'In Out' and 'Pleasure Storm' (which also features a Lipps Inc 'Funky Town' styled string section.Sare must have been in the same studio session via his Time Machine).

Tracks such as 'Dancing In Val D'Isere 1979', 'Attack of the Vowels' and 'Song' mine deep into Sare's analogue synthesizer collection. If you want to hear 70's oscillators doing their thing then this is the album for you. No samples or loops are allowed past the door here.

The artwork for the album is co-created with fellow Slovenian and Yugo-Disco General, Ichisan. It's surprising what a collection of objects from Sare's youth and consciousness and a day in a studio with a highly respected professional photographer can result in.some of the finest artwork that has passed through the doors of our young label, Nang.