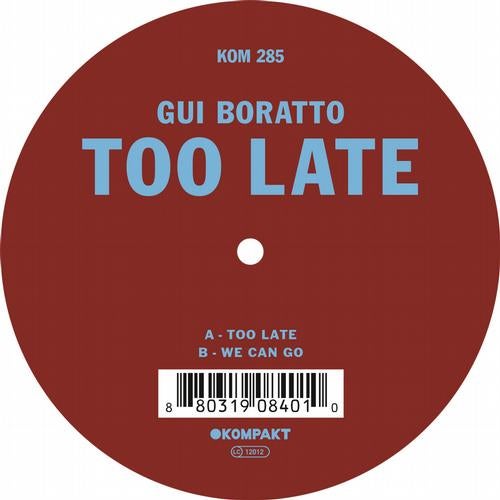 Release Info: A true KOMPAKT stalwart since his inaugural 2005 offering Arquipélago, GUI BORATTO shot to prominence thanks to his audacious live sets and an expansive release portfolio. With highly acclaimed club hits like Beautiful Life or No Turning Back to his name, the Brazilian producer captured audiences from all over the globe and continues to do so with his latest concoction TOO LATE, a wonderfully pop-infused 12 hosting two magnetic floorbusters and an abundance of style. GUI BORATTOs tracks are often considered the swiss army knives of club music, as they never fail to ignite a spark in the laziest of crowds, whatever its context or complexion. That might be due to the producers keen sense of ear-popping melodies and hip-swinging beats, a ridiculously catchy combination that clearly transcends simple notions of genre. Title track TOO LONG is no different, starting off as a pleasantly relaxed exercise in house and ramping up the immersion levels with finely tuned female vocals that owe as much to classic pop stylings as they do to the textures of club music. In the meantime, the flipside runs rampant with WE CAN GO, a hearty banger sporting a fierce bassline and some pretty gripping beats ready for world domination. The distinctive male vocals may bring a message of peace, but it shouldnt be mistaken for surrender this is an authoritative voice taking a stance, not the plushy whining of the spoiled and spineless. An exceedingly powerful slice of floor-sweeping glory, its another testament to the well-honed skill set that GUI BORATTO brings to the table, and a hugely succesful at that. Together, these tracks represent some of his finest work to date, giving club punters world-wide a perfectly valid reason to show up in full regalia. Tracklist: 1) Too Late 2) We Can Go 3) Too Late (Alternative Version)