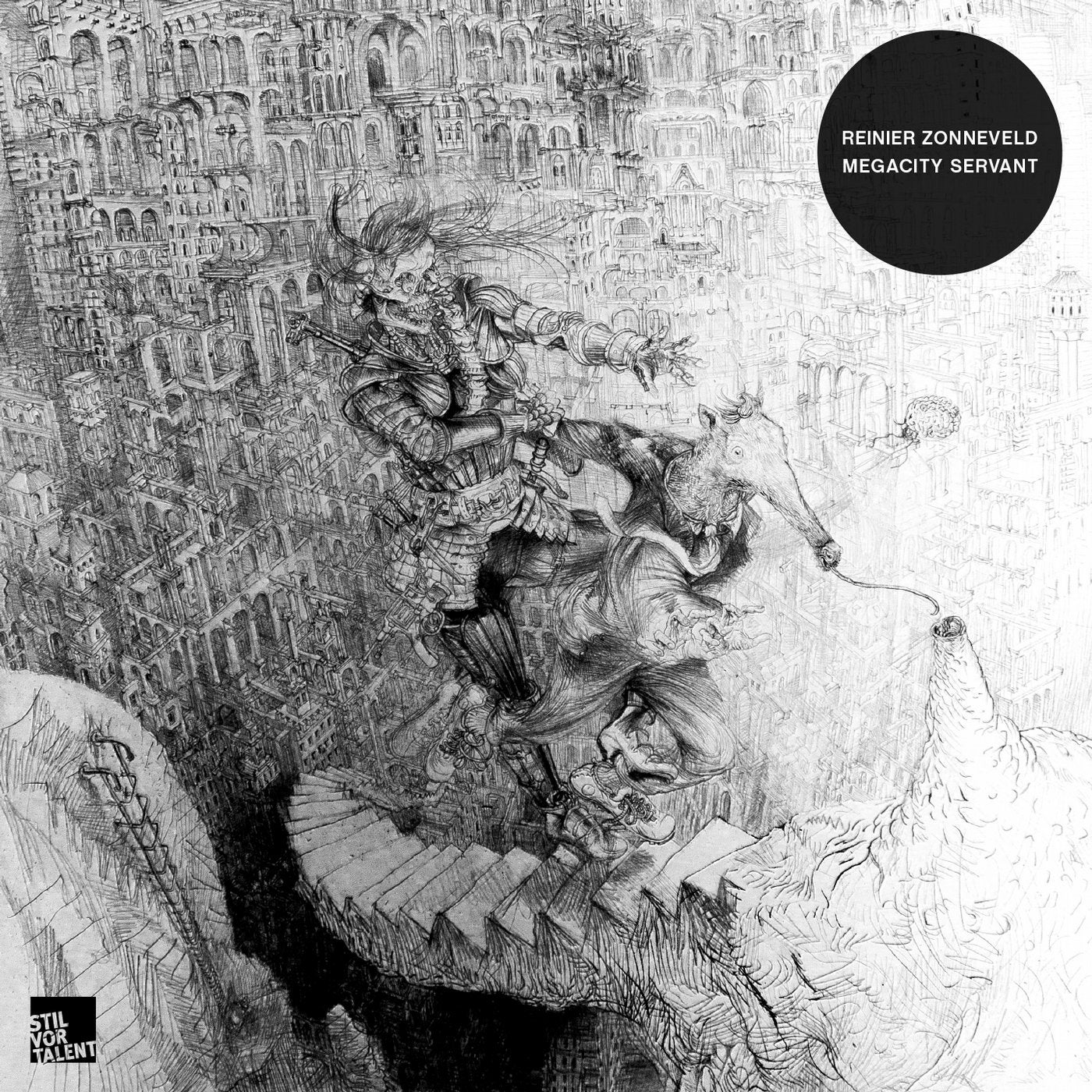 Channeling the energy echoing off dancefloors along his path, Reinier Zonneveld has been on a steady slope rolling out dance igniting productions while touring an intricate live set. Megacity Servant, the artists third studio effort, stands as a coherent 16-piece techno outfit tinged with experimental tones while playfully deconstructing classic acid and disco fragments. Coming from a classical music background, Reiniers style of production ranges from cavernous powertracks to more concise trips subdued with melancholic piano-stemmed soundscapes, rounding up to a signature sound that is evident as it is enveloping.

Plastic People, our intro to Reiniers collective body of work, swiftly introduces a raw techno dungeon mood. Varying elements make for a surrealist atmosphere. Whispered vocals give a soft edge, while the contrast between the upbeat melody and grave stems reiterate its dreamlike character. Following up in the same timbre, a heavy-hitting percussion sets off 8 Ball. The moving bassline is revealed as centerpiece, while faint vocals antagonize the rhythm. Techno mainstay vocalist Cari Golden makes a notable appearance on Things We Might Have Said. Having previously teamed up with sonorous names like Pan Pot, Fur Coat & Coyu, Goldens stellar vocals and skillful lyrics shine paired with Zonnevelds production prowess. The production-vox chemistry is instant, as the track mesmerizes from the get go. Seizing attention for the full length of the track, the entire arrangement seduces the listener, making for a clamorous earworm. Upholding the remote connection between titles and melody cores, Disturbed Minds offers an experimental set of distorted synths permeating the speakers. Spacedge comes in the form of a groovy, laid back offering, with a blunt loopy vocal and a fractalic field recording of over 50 layers as memorable high points. A winding repetitive beat serves as backdrop for Gateway. With a focus on dancefloor antics, elements zigzag, mimicking the initial arrangement. Having created an immersive loop, the percussion switches sides playing the melody, making for a subtle awakening just in time for the title track. Megacity Servant makes use of the classic Roland SH-101s ability to emit a nearly tridimensional sound ray, unfolding newer details with each listen. The relentless melody, padded with grave synth arrays, establishes a melancholic mood, gradually depicting the auditive struggle of its title-named character. EHT unveils a heavy-hitting resolution, as the artist layers on hefty polarizing synths. The cut boasts a powerful arrangement that is unsettling and playful at the same time, diving into dark techno realms. Modern Voodoo offers a trip down the dreamy side of techno. Sharp clangs and high synths pepper the melody amounting to a relentless, mind-reprogramming tidbit. Drowning out the noise of the outside world, Dive slows down the storyline, leaving just enough room to breathe until Dynamite pops in. Bolstering a progressive melody with a spacy vocal hook, the track turns the usual SH-101s 70s string loop into a techno-palatable disco instance. Sharp Bust 2.2 is the sole production thats previously been released, now reworked and reconstructed to amp up and stabilize the raw techno energy. Channeling on the compelling vocal talents of Aymar, Beast unfolds as a spacious and multilateral sonic journey. Coming from a non-electronic musical background, the singers lush voice offsets the metallic production pads, resulting in an intense contrast. Part of an ongoing collaboration with American pop-folk singer Simone White comes You Could Be The One I Want, a ludic techno ballad whose strong suit consists in the versatile nature of its vocals, being able to shift and reset moods. A steady groove with a wandering synth line, Abstinence brings a moment of brief calm, followed by pure downtempo in Anti Matter, closing off the narrative in an otherworldly manner.