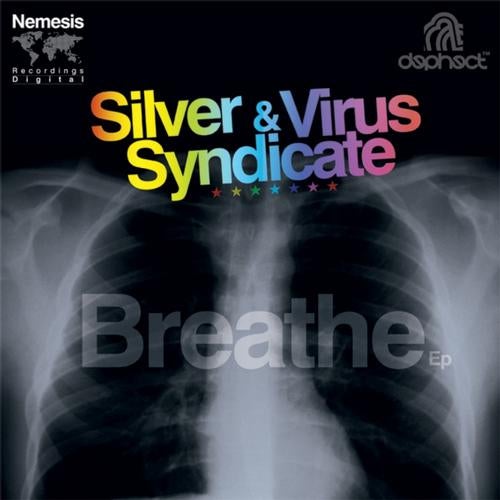 Once again the boys at NEMESIS have come with another smasher, and this time sees Drum and bass legend DJ SILVER team up with Manchester very own VIRUS SYNDICATE in the studio on the title track for the E.P BREATH. As you already know SILVER is no new comer to the game! Nominated for awards around the world for his precise mixing skills and energy behind the decks SILVER is also a long time member of the production outfit ACCIDENTAL HEROES and SONIC & SILVER. This guy never sleeps when it comes to drum and bass, his love and passion for the music has seem him toured countries around the world from USA to BRAZIL, Japan to Europe, and with his schedule is even busier than ever this year he still finds time to churn out a few bangers every now and then. VIRUS SYNDICATE on the other hand consists of three killer Mancunian MC's that go by the names of GOLDFINGER, JSD, NIKA D if you did not already know? Signed to the world famous PLANET MU record label out of London. These boys care classed as the cream of Manchester and the UK's leading artists when it comes to grime and dubstep. They also work along side top dubstep producer and DJ MRK1 and has seen them create top selling albums such as WORK RELATED ILLNESS and SICK PAY. Anyway on to the music now as the four horsemen ride out into the night with BREATH! Set to be a killer at some of this years top festivals SILVER has created a monster of a track! Dark spooky intro gets working before the bleeding drums meet the stabbing bass notes as this tune is not for the faint hearted! All three MC,s get to work hard while SILVER keeps the track rolling out nice and heavy for the punters on the dance floor! This one is a epic tune believe me! Also for all you dub steppers out there be sure to check the NORTH BASE remix who happens to be SILVER teaming up with long time partner in crime Mr PROPHECY. This 140 version twists things up even more where NORTH BASE gets to work on sluggish beats and tear out bass lines for the masses. Next up is the drum step killer that goes by the name of GENIUS SHAOLIN STEP which once again is another great tune! Hard drum stepped beats smash their way throughout the track while the heavy tearing bass is enough to pull the skin off your back! Moving on now we come to the epic piano roller from SONIC & SILVER that goes by the name of TALKING MUSIC. This time the lads get back in the studio once again to create another ACCIDENTAL HEROES classic. Big piano keys cut through the sound as the drums are nothing more than shear pleasure. This will go down in the vaults as another key tune from the duo. Last but not least we end off on a rolling tip where SILVER brings his HOUSE PARTY vibes to the table. Heavy sub bass meets rolling drums and and classic hip hop samples for all the old school heads out there that know, as SILVER creates another jump up banger, also not forgetting on this mini long player we get an exclusive dubstep mix from the one they call MATTA if that's not enough for your ear drums? All in all not a bad release from the NEMESIS camp as we see seven of dance music's top artists meet all in one nicely rounded E.P. This one is set to take the world by storm so make sure you get you hands on this killer E.P before it to late!