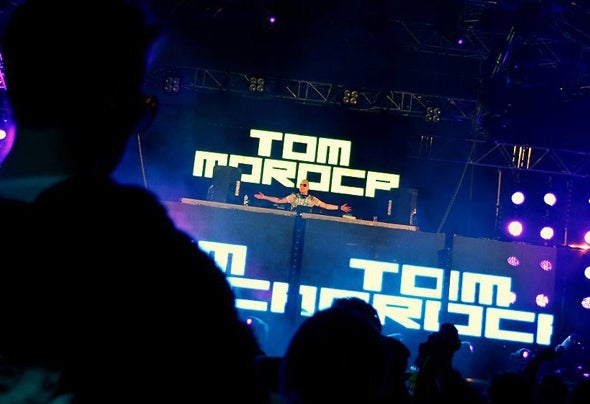 Thomas Madsen aka. Tom Moroca is no stranger to the evolving EDM-scene. From being a resident DJ in various nightclubs to playing at big events and parties since the mid-90s. In his native country Norway, he has played on pretty much everything from small venues to warming up for Lisa Lashes in a sold-out Spektrum (Trondheim). Tom Moroca is also one of few DJs to feature on the world-known Quart Festival and playing on a moving fleet through Oslo central on the annual Summerparade for about 70,000 people. After some years of success as a DJ, he started to produce in 2004 under his earlier alias “Adrenaline Dept.” In 2010 Thomas signed with Above Management and developed his current artist name Tom Moroca. This rapidly emerging alter ego has lately been developing his unique and intricate productions and caught the attention of many of the biggest labels within electro-house such as monolith label ‘Peak Hour Music‘, with names like Lazy Rich, Porter Robinson, Zedd, and Afrojack on their schedule. Thomas has shared lineups with names such as Sean Tyas, Basto, Flux Pavilion, Feed Me, ItaloBrothers, Taboo (Black Eyed Peas), John Moss, Claudia Cazacu, The Tidy Boys, Lisa Lashes, Misja Helsloot, Nick Sentience and Anne Savage – to name a few. His release ‘Hello’ from 2012 reached the Beatport Electro House Top 20 and was featured on several Beatport-charts including Porter Robinsons and Beatport’s own “Secret Weapons” for February 2012. His style of production is recognized by his heavy, bassline-driven sound fused with a variety of sub-genres like big-room, progressive house, electro and even trance. Early 2014 Tom Moroca signed to the major label Armada Music (In My Opinion), kicking off with his exciting track “Renaissance” released 5th of May. It will be a very promising season for Thomas this year and multiple new tracks will be spread out through the summer and winter. If you hear his signature mainstage basslines, a melodic and beautiful breakdown leading in to a massive drop that makes your fist pump – it may very well be a Tom Moroca track you’re listening to!