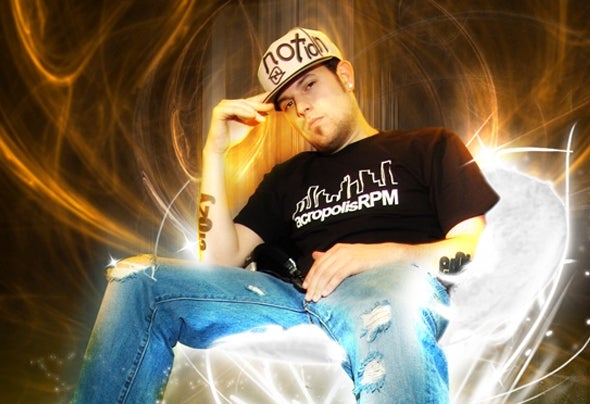 Ei8ht is a virtuoso programmer, producer and DJ poised to storm the electronic-dance scene with an extensive audio arsenal the likes of which has never been seen. Ei8ht, a.k.a. Leonti, is a musician with a diverse palette of influences he uses to paint an eclectic auditory landscape - whether it's writing emotional lyrics, crafting pop hooks with the Speaker Junkies, composing pieces for film and commercials, producing beats for the S.O.G. Crew or creating rogue, unauthorized mixes of tracks by Black Eyed Peas, Gwen Stefani, Kanye West, Shelly Harland and Blue Man Group - ei8ht is the product of a musical obsession that began at an early age. "I believe real talent starts with an appreciation for life," says ei8ht, searching deep within himself for the roots of his passion. "When my little brother passed away of cancer when I was eight everyone tried to talk to me but I became silent. I would listen to my cassette tapes day and night. Even just to fall asleep I needed music playing." When he was in the 5th grade, his uncle bestowed upon him special gift, a trumpet that he too had played from a young age. Ei8ht would quickly excel, exhibiting the earliest hints of the uncanny musical ability he had only begun to nurture. "I realized I didn't want to just stop at trumpet. I wanted to keep learning and trying new instruments," he says. In 7th grade he switched back and forth between the Euphonium and marching snare, but it was as a teenager that his true potential was first tapped. "I began to program music with a Korg M1," he reflects. "No one had ever seen someone my age doing this. As a senior I won three awards for my programmed music: 1st in school, 2nd in county, and 3rd in State. I really ended my school years on a high note." He would continue recording and producing his ideas. Somewhat of a revelation came in 2003 when ei8ht met electro legends the Speaker Junkies. "After being introduced to trance, techno and dance, I branched my focus from hip hop and pop music for a little while. It's a huge leap forward for me. I've grown as an artist, a vocalist and a producer. The latest single, "My Desire," a culmination of ei8ht's diverse influences, is already gaining momentum and notoriety on dance floors nationwide, with a whirlwind of remixes and heavy rotation. Earning 4 out of 5 stars by DJ Mag and quickly earning air time on Matt Darey's "Nocturnal Sunshine" global radio show, ei8ht's "My Desire" is now ready for the club and festival circuits. ei8ht's intriguing blend of "depthmensional" progressive brilliance ushers his trademark sound into Summer 2010 with a brutal dance floor vengeance. Adding to the assault, Samantha Newark's vocals impart an emotional airiness, softly unfolding the deeply woven story of "My Desire." Each remix delivers more driving bass and progressively builds toward unleashing a powerful deeper, darker, attitude-adjusting drop with a refined finish. Q&A WHAT SETS YOU APART IN TODAY'S MUSIC SCENE?When asked to describe his own music, his final words seem to sum up not only his sound, but his personality. "My rap music has a hint of house music in it. My pop music has a hint of techno music. I believe the world was made with many flavors and it's up to us to try them all." It is armed with this outlook that ei8ht pushes forward, continuing to balance creative and memorable songwriting, sonic innovation and the latest technology for a sound that is as cutting edge as it is timeless. One thing I've learned from being a fan myself, I'll never be too big for my fans. Never too big to jump off stage and shake a hand and never to big to have someone else respond to my MySpace. WHY DID YOU CHOOSE EI8HT AS YOUR MONIKER? The number eight means (biblically) new beginnings, to start fresh. It's also my favorite number. I just saw it as a fresh start for me. DO YOU FEEL YOU WERE "BORN TO BE FAMOUS" AS THE TITLE OF THE TRACK SUGGESTS? I have felt my entire life that I was born to a higher calling; to be the head and not the tail; to be above and never beneath. Famous is just a having a widespread reputation. I was born to be a leader, and having a reputation for that is what makes me famous. Being a good father makes me famous. Writing catchy tracks makes me famous. Not being untouchable makes me famous. WHAT CHALLENGES OR ADVANTAGES ARE THERE TO MAKING IT AS A SOLO ELECTRONIC ARTIST VS. BEING IN A BAND? I've done both. It's so much easier to go on stage with your friends beside you. If you make a mistake, it's collective. If the songs aren't what you thought they were, it's collective. If I'm alone, it's all on me. I can't allow that to happen. I will make sure I write the best I can, and put on the best show possible. It's this perfectionist kind of mentality that delays an album. I had to finally just set a date and tell myself, "You can't work past this, or you will never be satisfied." STATS MEMBERS: Ei8ht aka Leonti GENRE: Progressive House/Electro Pop/Techno FOR FANS OF: Fedde LeGrand, Roger Sanchez, Markus Schulz, Speaker Junkies, Dead Mau5