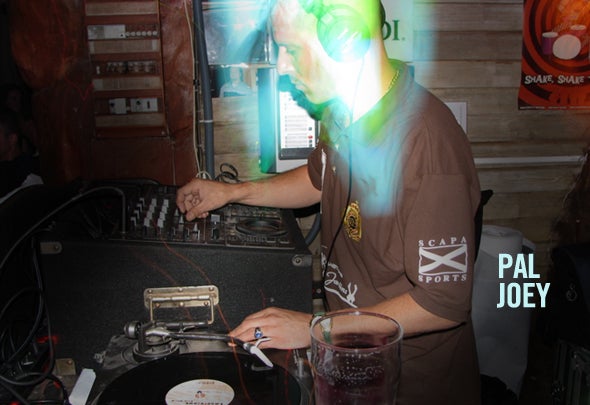 " I would like the people to dance. I play anything interesting that I think the crowd would enjoy. I also try to mix my music culture with what the people are generally familiar with." From his participations to Boogie Down Productions with KRS-1 to eclectic collaborations and remixes (Sade, The Orb, Lisa Stanfield, MC Lyte, Deee-Lite, Blaze, Ronald Burrell, Dana Byrd, Danny Krivit, Kerri Chandler & Jerome Sydenham...), Joseph Longo alias Pal Joey products his style at each record. Active New-York aesthet, he's Dj, runs music labels (Loop D' Loop, Cabaret, Foot Stompin') and composes again for others. Pal Joey owns a skilled vision in music unfairly unknown. In Hip Hop, House, or Nu Jazz, his releases are made of a rare and precious refinement. Last but not least, his prestigious collaborations hasn't prevented him to build his fame of leader in the underground dance music scene from the beginning of the nineties... Spend The Night is one of David Mancuso's favourites. Listen again to "Dance" by Earth People released in 90 or discover "Shake Dat Booty" by Three Kings recently compiled by the Masters At Work and playlisted by many others... "I Remember…My old stomping grounds - Central Islip - New York. Parties at the Rec Center. Breakdancing, handball... Who had the biggest box? The loudest? I hooked a turntable into a box (Boombox) and did my first scratch. "Lets Dance To The Drummers Beat". I started making pause button tapes. Mixed tapes from Amityville with breaks being cut up, I was hooked. Blasting the music in the house, the candy dish fell off the speaker, fell to the ground, broke and I got my ass wooped. Borrowing records from everyone in College was a great way to get them to come to the parties. Then we did the College circuit. Purchasing a 4 track reel 2 reel and editing with the razor blade patterns that I would make on a drum machine mixed with an accapella, then do another mix, splice them together and make a smooth transition. My first record in 88 was this type of medley. Working at Vinylmania Record Shop in N.Y.C. Larry Levan would hang out in the store in his pajamas. House Music all over the walls of the store, the streets, the clubs, cars. Working part time at Power Play Recording Studio in L.I.C. New York. Assistant engineering sessions like Eric B & Rakim "Follow The Leader", meeting KRS-1, producing "Love's Gonna Get'cha", studying recording techniques, and making beat, living in the basement in Astoria, New York and it was on! Productions landed me my first travel Gig to London, England to produce and remix songs for Dave Lee's label Republic (AKA Joey Negro). Remixing for Sade, really made the bell ring. Playing Soho "Hot Music" usually caused kaos. Loving every minute of it. Well, not every minute. Hard work, passion, no sleep, getting in the studio and creating. My dad told me that I had a gift." * jussumen - Feb 9, 2003 Pal Joey was also the singer on 'An Electric Storm In Hell' by WHITE NOISE ( under his real name Joe Whitman). It's good to have people like him around , who keep influencing the music scene with their individuality and non conformistic attitude. * Chadski - Jun 10, 2003 There is no way that Pal Joey is the vocalist on White Noise's "Electrical Storm In Hell". First of all, Pal Joey's real name is Joseph Longo, not Joey Whitman. Secondly, according to allmusic.com, the vocalist for White Noise is JOHN Whitman, not Joey Whitman. Third, White Noise are from England, Pal Joey is from NYC. Fourth, the White Noise record came out in 1969, and according to press clippings on Pal Joeys own website, he was 27 in the late 80s/early 90s, which would have made him approximately 5 years old in 1969. * cglee - Jun 21, 2003 Gee, where to start with this cat. Well, first and foremost to settle the debate above, Joey's real name is Joseph Longo III, not Joe Whitman. His productions are some of the most influential I have ever heard in HOUSE. He has inspired me and taken my thoughts and sounds to a new level. Hands down, this man is a legend even if he flies under the radar of most people. Truely an innovator in every sense of the word, Joey's early work is sure to go down in house music history (if it hasn't already). With a discography longer than most peoples biographies and an extraordinary number of quality releases, you just can't f*ck with this cat. On top of this, Joey is a fabulous DJ with a record bag you'd love to run off with. I heard Joey say once, "Sometimes its just to easy...you gotta push people, gotta challange them on the dancefloor, fo' real son"