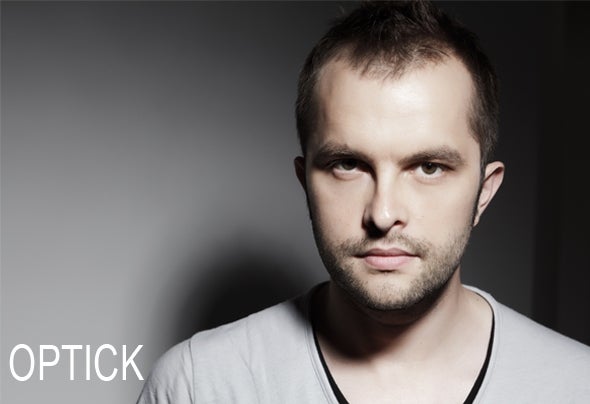 Since 2005, Optick approached music production, with a few remixes for romanian artists such Miki, Activ or Voltaj. We then worked with one of the most appreciated Romanian producers, Ciprian Lemnaru,with whom he launched "Maya" (the premiere took place on Ibiza Global radio station). Beginning of 2011 brings a new successful release, "Tremble", this time in collaboration with the NTFO duo. Even before its official launch, the material has received excellent feedback from some major names in the industry. Among the artists impressed by this release was Joseph Capriati, Loco Dice, Lauhaus, Audiojack, Butch and Tom Budden. Also, in the first months of 2011, Optick was invited for the third consecutive year to play in the major clubs in Canada. He had t he opport unit y t o play in Muzique Club in front of over 1,000 clubbers who have created an atmosphere hard to forget. In 2004 he was elected, at the Nights.ro Awards, in the top three romanian DJs and excelled in the coming years. He won trophies for several categories: "Best Romanian electronic production," "Best DJ Set" or "The best clubbing show". The highest win coincided with the Nights.ro Awards 2011, when DJ Optick was voted "Best Romanian DJ." There was a great evening, with Optick mixing the traditional "set of winners" and ensuring the warm-up mix for the special guest of the evening, the legendary Doc Martin. Soon, he launched with NTO, the Tremble EP at Sintope Vinyl, both digital and vinyl, and honoring a new invitation in North America. He performes in Montreal on June 9, at an event organized in the opening of the Formula 1's Grand Prix of Canada, and on June 11 he is invited in Enigma Lounge, Chicago. At the end of September, with the same NTFO, Optick launches Gruuv10, at Gruuv Records, realese that has sparked the interest of names like Loco Dice, Lauhaus, Audiojack, Joseph Capriati, Butch and Tom Budden.