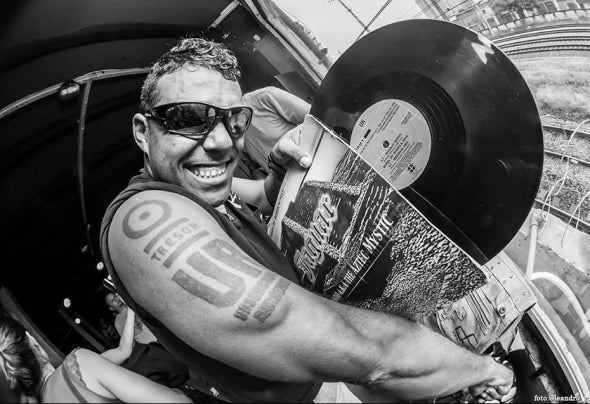 Halley Seidel and one of the top DJs of the electronic music scene in Brazil and the world.Its history and mixed with the pioneering spirit, grit and determination in the market of electronic music in Brazil more than 20 years, and still active.Attracting numerous events was known in Brazil and abroad, we can quote some of them;Rock in Rio - Tent Electro 2000 Summer Festival - Salvador 2007 Ipanema beach Stereo 2006Chemical Music Festival 2010Tresor - Berlin 2007/2008Limelite - Dubendrof CH 2007 12hundret Club - Frankfurt Oder in 2008 Electro-generation 2006/2011After Beach-2010/2011 Digitalia - Salvador 2012This Rio de Janeiro and a pioneer of electronic sound is commanding the pickups on the scene two decades ago.He answered by the nickname acetatozuca aka Halley Seidel and has participated in several mega-events!Who ever heard of the largest dance floor in the world? Ipanema Stereo Beach!?! Yeah, he played there for an audience of 300,000 people,And do not stop there ... He has played in the tent at the Rock in electro III.And several events in Brazil and worldwide!They are:Skol Rio, Salvador Summer Festival, Rock in Rio III, Chemical Music Festival, among othersIf CLUBS presented one of the largest in Europe, the legendary "Tresor'' - Berlin, in two editions of several other European clubs across the continent.Released many singles and vinyl records & CD, when the Group integrated BUM - Brazilian Underground Movement, responsible for disseminating electronic music in Brazil at times barely heard about this segment of music and there were only imported for sale discs.Today, owner of world renowned PTZ Records label, Halley Seidel, launches several national and international artists on his label and his own eps' on labels, all over the world.Media Records, Klinik Room, Prismat Rec, Rebel Eye and...Halley DJ Seidel, a Brazuca with sound in the vein E!One of the pioneers of electronic music in Rio, pure talent and a great story!