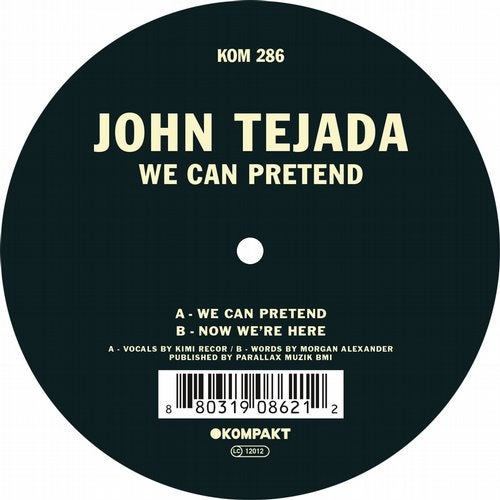 Releaseinfo: Booting up where he left off with SOMEWHERE (KOMPAKT 264), Kompakt gearhead and modular wizard JOHN TEJADA continues to woo away contemporary crowds on WE CAN PRETEND, a somnambulistic two-tracker that delivers more bang for the buck, but also knows its way around the pressure-sensitive areas of the dance floor. The LA-based producer and DJ is well-known for his particular flavor of subtle, but muscular techno delivered in a exceptionally polished manner, but it was his last album THE PREDICTING MACHINE (KOMPAKT 267 CD 102) where we saw him delve deeper into analogue modulars than ever before. The result was a certain rawness that translated quite well into JOHN TEJADA's intricate arrangements and gave the producer the necessary edge for reaching a new level in his work. That can be clearly heard on the title track of WE CAN PRETEND, where springy percussion and simple, yet masterfully sequenced synths prepare the runway lights for KIMI RECOR's sweeping voice. It's a timeless cut overflowing with classic pop appeal - and as such one of the most accomplished songs in JOHN TEJADA's armoury. He follows the opener's catchy bliss with NOW WE'RE HERE, a direct sequel to outstanding spoken word cracker SOMEWHERE. That same urge for an assessment can be found on this one, accurately portrayed by crackling diatribes from MORGAN ALEXANDRE and embedded in deliciously pumping beats.