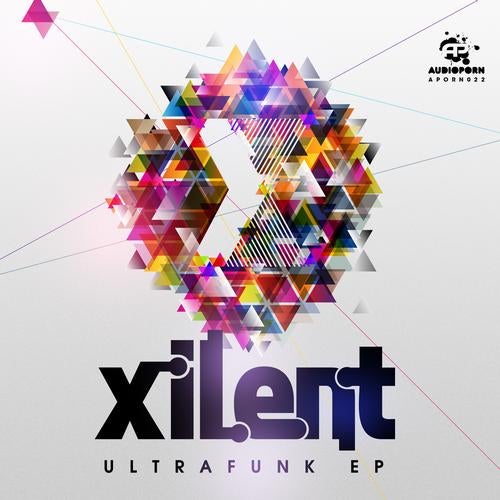 When Xilent released his breakthrough Choose Me EP almost a year ago, the world of beats and bass culture took notice. Since then, a whirlwind 12 months has seen Xilent enlisted to remix artists such as Subfocus (Out The Blue), Yogi feat. Ayah Marar (Follow U), Pnau (Unite Us), Alex Metric feat. Charlie XCX (End Of The World) and J Majik & Wickaman (In Pieces) and brought on bookings for debut performances at the UKs biggest bass culture shows (such as Ram @ Fabric and UKF @ Proud 2) alongside a stream of bookings from all around the world. In amongst this hectic schedule, Xilent has also found time to continue his work in the studio and the Ultrafunk EP represents the first in an EP double header on the ultra selective and much hyped AudioPorn imprint (run by Shimon, founder member of Ram Trilogy alongside Andy C and Ant Miles, and original member of the Ram Records crew).To many (especially the legions of fans brought to him by the constant patronage of UKF Dubstep) Xilent is the king of a unique dubstep sound flying in the face of screwface simplicity, however Xilent has never been a one genre producer and this EP showcases his signature sound around the 170bpm mark with four tracks that have already been tearing the roofs off clubs and been eagerly jumped on by Radio 1s finest in the shape of Zane Lowe, Annie Mac and new Radio 1 DnB supremo Friction, with Zane even bagging the worldwide exclusive first spin of Beyond as his Hottest Record In The World. Xilent has always been something special, this EP proves once again that the future could not be more exciting. Twisted A new dawn sci-fi intro is accompanied by a distant heavily processed triplet time beat, until a breakdown of sweeping rushes of bass lead to a pure euphoric crescendo before the drop. The main body of the track itself utilises a militant robo triplet beat underpinning an answer and call arrangement between a staccato one note warning signal and bass warps and rushes which propel the track along with an irresistible swing and rhythm into further bass drum and snare switch ups and dread style bass growls. This is pure cerebral leftfield dancefloor business, sounding and moving feet like nothing else. No doubt those who produce will pick over the multitude of subtle flourishes and genius studio touches, for the rest, just get on your feet and enjoy the futuristic mechanical funk of Xilents latest android banger. Ultra A suspense laden opening is overlain with the repeated spoken hook everything begins with ultra, its time to create a new culture somewhat a mantra for Xilent who is indeed spearheading a new way to look at bass culture, straddling the divides between those who like to rave, the critics, mainstream radio and the tech heads. The track itself rattles along with ratchet tight tech bass drum and snare, as heavily processed mid range and bass trills and weaves around the beats, switching effortlessly in feeling to otherworldly ambience at the breakdown and then back once again to the funk fuelled riffs. Almost giger-esque in its biomechanoid marrying of the soul and feel and robotic perfection, this once again showcases a sound that no-one else can hope to match. Beyond When Zane Lowe announces a track as his Hottest Record In The World, as he did with Beyond (bagging the worldwide exclusive in the process) its a significant breakthrough for any artist, and while Xilent is already critically acclaimed in the bass culture underground is it testament to his talent and ambition that the accolades from mainstream media continue to tumble in. Beyond encapsulates everything that Xilent represents at this present time with a swirling ethereal reverb drenched vocal and synth intro, dropping down into an off beat but always rolling drum pattern which keeps you guessing at every turn, while retaining the flow to keep the dance moving. The bass production which surrounds it is nothing short of a masterclass with multiple syncopated layers of buzz bass, drills, warps, synth flashes and raining snatches of melody all combining to produce bass destroying mayhem within a track bursting with creativity and delicate touches. Do It Opening with glorious sweeps and rushes and a female vocal ghosting through the mix, this is a moment to catch your breath in the dance, for hairs on end spine tingling expectation as the layered warmth of the intro washes over you. At the breakdown, filtered distant keys rush to the foreground till the drop where Xilents incredible production is as always nothing less than revelatory. Filtered synths pulsate around the beats, clinical in their efficiency but packed full of what is sorely lacking in so many DnB productions - soul, feeling and expression. As with many previous Xilent tracks, it is the space in between, the gaps in the mix that give the track its identity. This is a DnB track par excellence, full of joy and dancefloor ability but also soaked in melancholia and equally apt for an after party dawn as a hands in the air sunset. Pure brilliance.