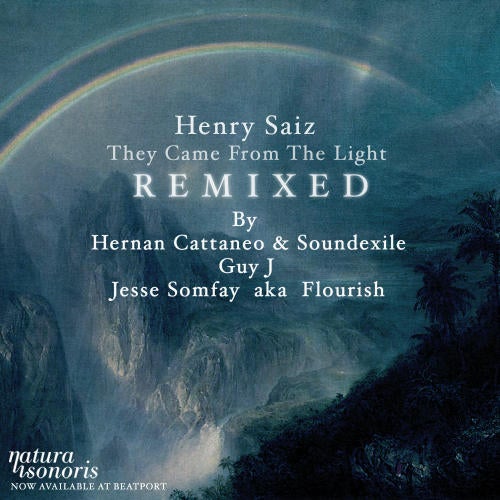 Natura Sonoris presents the remixes of Henry Saiz's acclaimed track "They came from the light", reworked by some of the most representative figures from the melodic progressive tech-house and experimental electronic scene: HERNAN CATTANEO & SOUNDEXILE, GUY J, JESSE SOMFAY and FLOURISH.

The first remix is a Hernan Cattaneo and Soundexile re-creation. Cattaneo once again joins Soundexile, probably South America's most active production duo, to create a delicious remix of pure driving tech-house and a perfect rocket for the dancefloor.

In his remix, Guy J develops a techno-dancefloor-bomb of a track, a tribal-dark tune that is already raising passions and promises to be a hit during the Winter Music Conference in Miami. This track is already in the suitcases of djs such as Digweed, Dubfire, Pete Tong or Sasha.

For his part, Jesse Somfay, the experimental electronic music producer, executes two incredible remixes. The first one is a mental trip full of Somfay's purest emotional style and the second one, under his alias Flourish, a masterpiece of dark and impressive experimental techno, which closes a an EP complete with 4 great different visions of the same track.

An EP full if stellar names which proves that Natura Sonoris is growing rapidly and that it is a label that still has much more to offer.
We hope you enjoy it!

They Came From The Light REMIXED