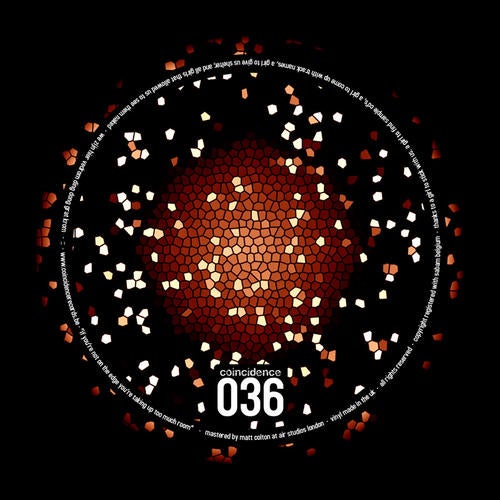 Tom Dazing & Gols have been connected to Coincidence for ages: they both started out djing on the same nights where we were regular guests and Tom signed to the label as one of the very first artists and did a few remixes as well . Also in their dj careers their paths and ours have continuously crossed. So, we are proud to welcome our friends once again to the label.

Tom Dazing hardly needs an introduction after having made releases for labels like Trapez, Heimatmelodie, Toys For Boys, Heimatmelodie, MB Elektroniks and many many more. He also got widely recognized for being a remarkable dj which brought him to just about any event you can think of in Belgium. But also his international gigs got noticed: after representing Coincidence in the U60311/Afterburner club in Frankfurt AM, he secured a monthly residency there. Together with Gols he also built up a new concept from scratch called Thriller, a party that has consistently managed to bring names to belgium who just were on the brink of becoming well known players.

Gols originates from the same city as Tom (Aalst) and it was in the local nightlife that they met and found common ground in their musical taste. He was resident in a local club but soon developed an appetite for the deeper sounds of minimal and house. His dj talent is undenieble and quickly took him to the best clubs and events in the country. As a producer, he became lab partner with Tom Dazing and quickly went on to release the typical percussion-fuelled pumping tracks we learned to know on labels like Hermanez Miconn and Dreielf Recordings (the label from the Frankfurt based U60311 club). And now on Coincidence.

The remixes are also pretty cool if we may say so: much to our delight, our favourite producer duo Los Updates (Cadenza, Sei Es Drum,) loved the original track and went to work to create a massive remix that is clearly a new benchmark in the labels landscape. In their typical style encorporating the latin vibes and the darkness of the clubs, they deliver a signature remix too crazy to believe. We cant be more proud that this is on our little label. The second remix was made by those former Coincidence debutants from Toronto Canada, Beat Syndrome. The canadians might live in a freakishly cold country, but the warmth coming from this version will heat up any dancefloor instantly. An amazing dancefloor bomb that will move any floor, garantueed.

Add to that the fact that all tracks were mastered to perfection by mr. Matt Colton from Air Studios London (Kanye West, Kylie Minogue, Rolling Stones, Libertines, Time To Express, Mowar Records,) and you realize that this is a serious package youve got on your hands. We adore this release like its a child of our own: we hope youll think the same and youll blow your dancefloor to kingdom come with these bombs.