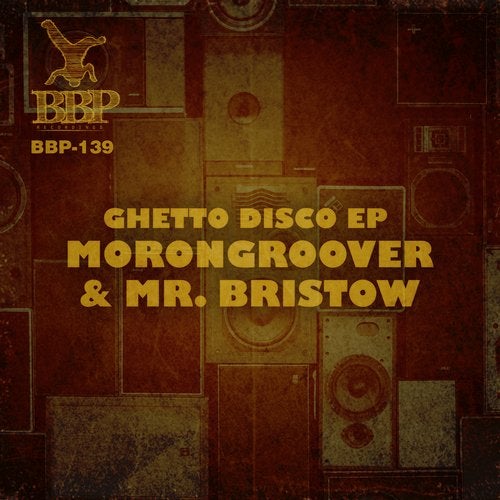 Breakbeat Paradise Recordings is back at your service, for all the funky disco lovers out there. Two BBP all-stars: Morongroover and Mr Bristow have joined forces on this project, which they have chosen to call: Ghetto Disco. Basically it encapsulates 70s disco funk influences with a healthy dose of Moog bass, and merges it with classic MC hooks and scratches. This compilation gives you the style of music Morongroover & Mr Bristow have been pushing for the last six months and matches perfectly with the recent disco vibes that have been going on at the BBP camp.

The first tune from the producer team can be found on the recently released Disco Paradise, where Morongroover & Mr Bristow teamed up on the Jump to It jam. Fast forward a few months and here we are will a full 4-track EP of the same kinda groovy stuff that makes up the Ghetto Disco sound.

The EP kicks off with a big groovy disco hook and some classic hip-hop vocals on a steady 4-to-the-floor disco beat on the I Like It Like That jam. Following that, Mr Bristow is brought in to put his expertise to work on the Front to The Back jam that adds some additional details to the mix in the form of bongos, shakers and heavy open hi-hats.

On the flipside we have another solo Morongroover joint, which perfects the Ghetto Disco concept with catchy bass lines and classic MC-ing on the Wizard of Oz. This jam will be sure to get activity on the dance floors, and has already been getting support by DJs including BadboE, who included it on his latest mixtape.

Last but certainly not least, the producer duo is back together for another slice of Ghetto Disco on the Where You At jam. The big moog bass, funky stabs and scratch hooks are all lined up for this EP to end at the top.