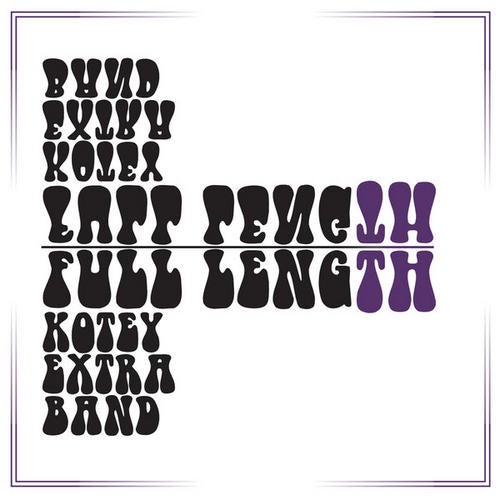 Finally the chief bear gets some music together for his 'Full Length' musical experience. Kotey Extra Band isn't really a fully fledged band so they had no rehearsals, no missing bass players, no fights over who plays the lead guitar and certainly no groupies.

Bearfunk has existed for over 10 years and in that time Stevie has worked with many great musicians and artists so the aim of the extra band was to highlight some of these collaborations and have some fun.

Whilst writing the 'Soiree' LP with Max Essa, Stevie decided to leave the tapes rolling and record some extra tracks. Tiff McGinnis aka Crazy Girl gets the ball rolling with 'Hustlin', a song that will strike a chord with other hustlers that have to deal with the city life.

Kyle "Sly" Chandler from Foolish & Sly delivers some amazing vocals on 'Disco High', a song about a disco addict that needs his daily fix. 'Leave me I'm Dancin' is all about walking through the club looking good and feeling good as you're there to dance not to talk!

Hans Peter Lindstrom adds his magic to 'Daybreak' and 'Danger Eyes' which also has an all-star line up of George Demure on vocals, Max Essa and of course Kotey. We also add an unreleased 7" mix of 'Sooner Or Later' which brought Kotey's collaboration with the legendary Chaz Jankel. Long time friend and fellow Chicken Lip, Dean Meredith, adds his drum wizardry to 'Reuben's Rocket' and 'Scooter Show' which also features Robin Lee of Faze Action, another long time friend and collaborator and all round musical genius.

A few years back Stevie's man in Poland, Artur 8, played him a song by an emerging star, Max Skiba, called 'Violet Carnation'. The song was later released so Stevie decided with the help of Robin Lee and Max to cover it. The result is a very pleasing dark percussive take of the original.

The LP ends with 'Grand Ideas' and collaboration with Robin Lee which takes the raw elements of bass and guitar to concoct another dark mysterious groove.