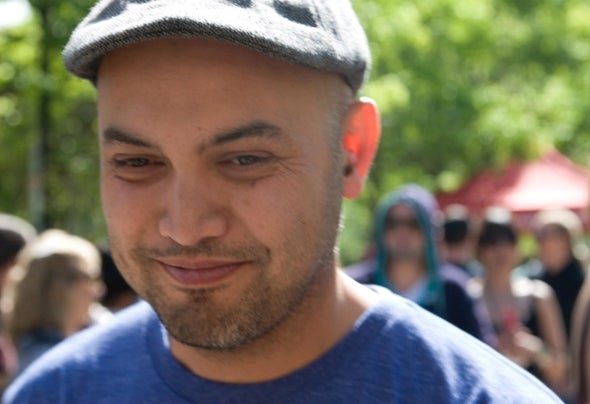 Ejay Toledo aka Hotbox started his musical life in the San Francisco Bay Area listening and dancing to Jazz, R&B and Hip Hop. With his roots already in soul music, its no surprise that his first experience with House music in the early 1990s created a lasting impression. In fact, it was a life changing experience. Djing since 1995, Ejay is a veteran on the decks seamlessly mixing musical styles from mid-tempo, nu disco, on up to deep house, and tech house. In 2011 Ejay ventured into doing live pa sets showcasing all of his own original material under the moniker Hotbox. Wether on the decks manually beat matching by hand or preforming live, you can count on his signature sound keeping things deep and groovy. As a producer, Ejay has been dabbling in the studio since the early 2000s and has ventured in many different directions of house music. In early 2010, Ejay was intrigued to explore lower tempos and has since been producing music in the realms of slomo house, nu disco, and deep house. Deriving from long smoked out sessions, combining chunky minimal beat structures, bubbling funky basslines, deep chords, and a hint of disco flare, Hotbox was born to bring a new brand of pitched down house grooves. Also a promoter and co owner of Spellbound Music, Ejay and life partner Angelina have regularly hosted day time out door events and after hour undergrounds in the city of Denver and surrounding areas since 1996. Spellbound Music events are known for their strong local support, eclectic blend of music by local talented djs, decked out decor' and powerful dance floor vibes.