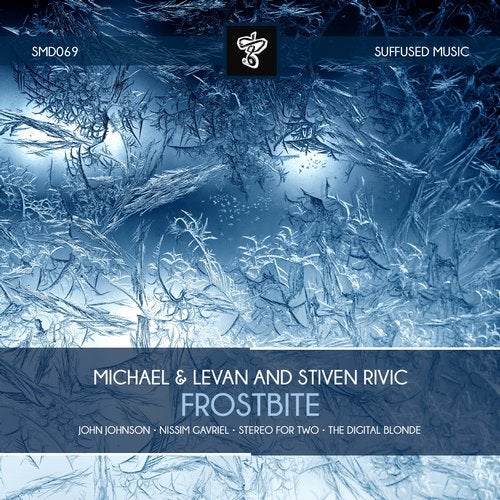 The 69th release on Suffused Music sees Michael and Levan and Stiven Rivic returning to the label for their fourth appearance. The much loved trio and Mistique Music founders have been on a roll this year with several singles on their newly formed Kunai Records imprint. As 2014 is now winding to a close we see Michael and Levan and Stiven Rivic with perhaps their biggest studio creation of the year. The trio's debut single for Suffused Music is entitled 'Frostbite' and it comes with remixes from: John Johnson, Nissim Gavriel, Stereo For Two and The Digital Blonde.

The original mix leads the release off and showcases what so many electronic music fans love about Michael and Levan and Stiven Rivic's productions. The trio's well carved groove and vibrant rhythms create an electric vibe early on. As the track builds several complementary hooks get dropped in along with a barrage of effects which just add to the peak time nature of the record. The main break shifts the mood to a gaseous soundscape which slowly evolves into a subtle but goose bump inducing beauty. The trio's radiant textures and luminous vocal pads are spine tingling and once the beats drop back you're bound to see a hands in the air moment. Easily one of Michael and Levan and Stiven Rivic's biggest tracks of the year. Also included is an Intro version of 'Frostbite' which contains a two minute ambient prelude that sets up the meat of the track perfectly.

The first interpretation is provided by John Johnson who long time electronic music fans will certainly remember for his epic releases 'Impact' and 'City EP' which both came courtesy of Marc Et Claude's. On the remix front he's delivered some tried and tested classics as well with Bedrock's 'Heaven Scent' and Dove Beat's 'La Paloma' being at the top of the list. For his cleverly coined 'Space Ninety 8' 'Frostbite' interpretation John has stripped the track right down and crafted a drummy, peaktime epic which is surely set for dance floor carnage. Backed by a romping and incredibly infectious swarm of bees style bass line the energy here is nothing short of enormous. Add to that a wonderfully unique twist on the 'Frostbite' themes and you've got one of John's biggest and most menacing productions of the year.

The second interpretation of 'Frostbite' is provided by Nissim Gavriel who is making his first appearance on Suffused Music. The Israeli producer has made a huge mark in the progressive underground this year with appearances on 3rd Avenue, Stellar Fountain and System Recordings . Nissim's slow burning hypnotic style has worked wonders on the 'Frostbite' theme. With an underbelly of driving rhythms and emotional chord changes it's sure to be not only a great club record but also one that stimulates your heart as well.

The third interpretation of 'Frostbite' is provided by Stereo For Two who are making their second appearance on Suffused Music. Tim Verhees and Joris Bylemans make up the Stereo For Two production team and currently reside in Antwerp, Belgium. The duo have built an incredible discography over the course of their two and a half year partnership. Releases on Baroque Records, System Recordings and Spring Tube Limited have all been quite strong and their interpretation of 'Frostbite' goes down as one of the strongest on the release. Backed by a well carved groove and deep undertones it's a mix that emanates a real presence. Unique vocal loops and a killer sax hook lead to the main break which further explores the gorgeous piano lines that ultimately set up a rousing second half conclusion. Definitely the deepest interpretation on the release, it proves to be a great complement to other more peak time inspired versions.