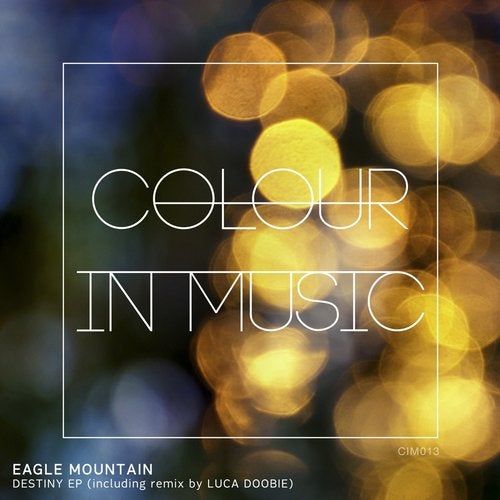 Eagle Mountain brings his first full release to Colour In Music, with a simply pleasurable track called "Destiny" beginning with a ambiguous loop, a twisted vocal emulating an instrument, with the subtle hint of ambience deep in the background, ever so slowly growing with soft cowbell-like clinks to a joyous vocal that breezes through. Before things get too comfortable, a new loop is brought in, another vocal instrument that completes a nod to old-school house samples and rhythms.

Luca Doobie debuts at Colour in Music with his remix, making those vocals a little more sharper, turning them into quick breaths with long synths that wind down and up, like noise through a tunnel. Soon the ambient tones of the original ascend, gasping for air briefly before Doobies darker edge moves back into the foreground, turning ambience to funk, waves into jives, and the original into his own.

"All Is Fair" has a more eccentric flair to it, with whirring industrial electronic tones with an oddly soothing hum that buzzes into life as an emulated string assemble, added together the contrast is a wonderful thing, working in unison to create a song that rattles with originality. Soon more organic hi hats and claps, along with short key hits, create a bridge to a tribal area, where we return to the buzzing life, for one more ride on a track fully in motion.

Immediately blaring with jazz and funk, "Swimming Pool" s a track that floods with the same kind of refreshing coolness as the title. Wet synth sounds crescendo into hisses from cymbals, reversing into their original sample, those bursts of brass. Suddenly things move to quiet squeaks and rhythms, but the low brass sounds stay in frame, standing just behind, allowing the ears to appreciate the many layers to the funky sound.