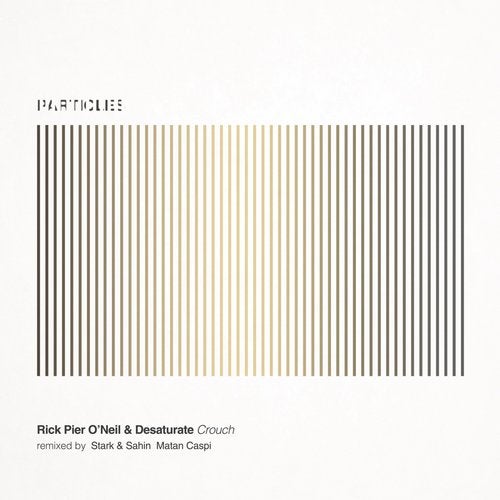 Part of the Particles summer release schedule, Rick Pier O'Neil and Desaturate continued a rich vein of production form with their "Crouch/Cursed" EP in July 2016. Now Particles revisits the EP as "Crouch" receives a pair of remixes from the USA and Israel.

Dan Stark and Sertac Sahin are two US based artists joining forces for an aural assault on the deep and tech house genre with impressive results. Coming together from diverse backgrounds, both are accomplished producers and DJs in their own rights with their solo work hitting a plethora of different labels since the turn of the decade. Finding renewed vigour through their collaborative approach, the monthly show, "The Way" on Proton Radio, launched a new offensive to "showcase their signature sound" through a juxtaposition of different approaches and styles that complement each other when brought together. Commencing in March 2016, the show continues to go from strength to strength.

Production work that began with March 2015's remix of Hernan Cerbello for Low Pressings, has continued at rapid pace over the past twelve months. Thus, a growing catalogue of original works for Witty Tunes, Zenbi and Go Deeva has impressed, remixed by such leading lights as Sweden's Inkfish. A remix of Oliver Lieb's "Caldera" in February 2016 represented a fine Particles debut for Stark and Sahin, so it is with pleasure that we now welcome the duo back to the label. Remixing "Crouch", a strong rhythmic framework and shifting percussive cadence provide an anchor for the bass line, so fundamental to the original, to drive hypnotically forwards. A raft of additional production material is then found through twinkling melodic riffs and sonic soundscapes, coupled with Pier O'Neil and Desaturate's memorable effects, to create an impressive rework.

Israeli, superstar, Matan Caspi, has been at the forefront of both the underground and mainstream dance movements for a decade. Both as DJ and producer, Caspi has lit up the dance arena with performances in over twenty countries, through his "Beat Avenue" radio show - syndicated to stations across the globe - and well over a thousand production credits that span a host of impressive imprints including, Spinnin', Pacha and Enormous Tunes. Coupled with support from a galaxy of A-listers that include, Above and Beyond, Eric Prydz and Sander Kleinenberg, it is not difficult to see why his name is so revered. Indeed, appearances on Kleinenberg's "This is" compilation and Sultan's "Nubreed" for Global Underground, has continually seen Caspi at the height of the modern dance scene, enhanced further by the foundation of the "Outta Limits Recordings" label with fellow superstar, Stan Kolev.

April 2016's remix of Li-Polymer's "Silence between Us" marks Matan Caspi's impressive Particles debut and so it is an honour to now welcome him back for a second remix. Reworking "Crouch" in typically impressive fashion, a clever bass line variation and pounding beat sets the foundations for a groove-laden, up tempo remix that is full of Caspi's trademark production values. Creating a dance floor destroyer that is certain to delight, intelligent retention of the original's themes, with the addition of a sublime melodic sequence in the third movement, has generated a rework of power and precision from the Matan Caspi studio.