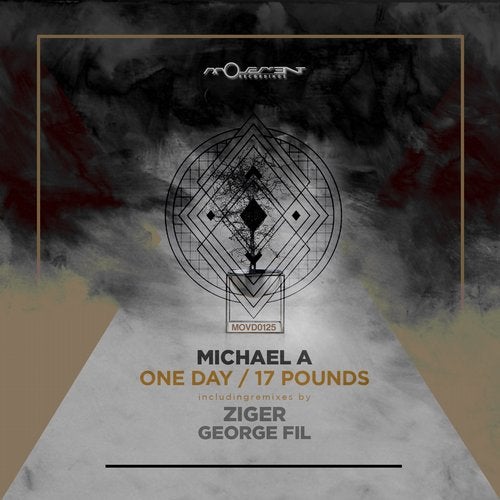 The latest release on Tash's Movement Recordings welcomes Michael A back to the label for a brand new EP. The Belarus based producer and Genesis Music label boss last appeared on the Greek imprint in June of 2015 with a remix of Uvo and Lautaro Varela's 'Dreamcatcher'. Now making his fifth overall appearance Michael presents his latest original productions 'One Day' and '17 Pounds' alongside remixes from George Fil and Ziger.

Some of Michael's biggest supporters in 2015 were Hernan Cattaneo and Guy J. His modern take on progressive music has carried that over into 2016 and the lead track here 'One Day' looks set for a similar fate. Beginning with a chunky, driving groove Michael methodically works through a variety of strong rhythmic motifs. As twisted lead lines intertwine the rising atmospheres initiate the main break. Short, dramatic and full of tension the tracks centrepiece culminates with a trail of indistinct vocals and sweeping noise, which should not only have the full attention of your dance floor but sets up an exhilarating conclusion.

The lone interpretation of 'One Day' is provided by George Fils who is making his second appearance on Movement Recordings. The Greek artist not only compiled the labels 'Modern Filosphy' collection but also collaborated with label boss Tash on a special track for the release. George has also appeared on affiliate Just Movement with a contribution to the labels 'Winter' collection released in February of this year. George's pendant for chugging club grooves has worked wonders on Michael's 'One Day' and resulted in the finest production of his career. An underbelly of billowing bass swells anchors the piece while trippy effects flow through the framework. The main break finds George bringing a solemn approach, it's one of hope and longing, perfectly setting up a smooth acidic build and warm rush to close the track out. Beautiful remix from George.

The companion piece '17 Pounds' finds Michael going dreamier and more atmospheric all while keeping that techno state of mind. Anchored by a rolling groove and drifting backdrop the framework gets adorned with blissful vocal pads and waves of clattering percussion. It's a smooth ride into the main break where Michael unveils one of his career best motifs. Gorgeous clusters of keys, processed to perfection, hitting all the right emotional buttons and taking you on a journey to the heavens over an elegant second half conclusion. Certainly one of Michael's most heartfelt productions to date.

The lone interpretation of '17 Pounds' is provided by Ziger who is returning to Movement Recordings for his third appearance. The Greek producer had some amazing moments in 2015, his 'Circles' single remains a highlight of the Movement discography while a release on Guy Mantzur's Plattenbank Records was one of the summer's most popular releases. Now for his first production of 2016 Ziger reinvents '17 Pounds' in his own inimitable style. Coming in tougher and edgier, Ziger's dark take on the track complements the original wonderfully. Rough stabs dominate the first act before giving way to an ethereal theme which instantly lifts the mood as the breakdown commences. Time stretched vocals and a vortex of filters precede a rush of warm beats and sonic dust as a dreamy third act takes you home. Gorgeous remix from Ziger rounding out another stunning release from Tash's Movement Recordings. Don't miss it.