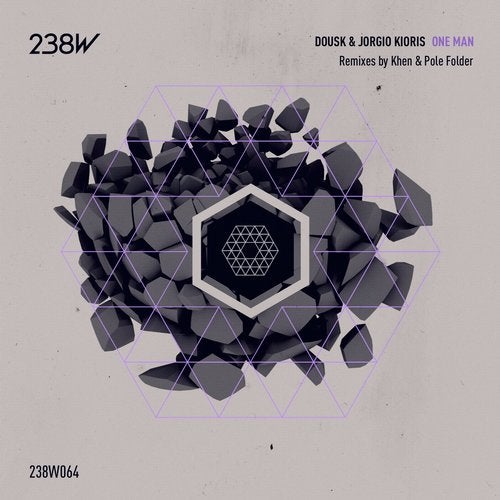 The 64th release on John Johnson's 238W Inc. imprint welcomes Dousk and Jorgio Kioris to the label for their debut single. This marks the first collaborative project for the duo who have both etched their place in electronic music history. As a long time favourite of John Digweed, Dousk's career began on Bedrock Records. Subsequent appearances on Global Underground and Vapour Recordings sealed what has now been a 15 year career of cutting edge electronic music. Fellow Greek artist Jorgio Kioris is perhaps best known for being the owner and founder of the Bloque Festival, one of his country's foremost electronic music events. Of late, Jorgio has also made his mark in the studio, turning out stellar releases for Cid Inc's Replug Records. Now for the 64th release on 238W we see Dousk and Jorgio presenting their first collaborative project entitled 'One Man' alongside remixes from Khen and Pole Folder.

The meeting of two creative minds is always exciting and the Greek duo have certainly fused their most loved production hallmarks here. Beginning with rugged bass stabs, smart tonal designs and quirky hooks, it's nose for the dance floor is immediately evident. A vocal storyboard only adds to its esoteric appeal while a sequence of chord changes teases the emotions just a touch. Stripping down into the main break, the bass tones carry the groove before getting washed away in a trail of sonic dust, culminating with a rush of noise and the irresistible hooks which take you home. A unique and inspired production from Dousk and Jorgio.

The first interpretation of 'One Man' is provided by Khen who is making his first appearance on the label. Hailing from Israel, the 27 year old artist has been at the core of his countries electronic music culture for the last several years. With a groovy, emotional sound that's all his own the future seems to hold only the brightest of moments for Khen. His releases on Lost and Found, microCastle and Sudbeat continually top the Beatport charts, while earning play from Hernan Cattaneo, Nick Warren, Sasha, Guy J and Guy Mantzur. The fourth quarter of 2015 proved to be the strongest of Khen's career. Now following a quiet start to 2016 we see him turn in a superb rendition of 'One Man' for his first production of the year. Anchored by a full, round and immaculately carved groove the mix begins with an immediate charm. Marvellously reshaped, the lead hooks prove deadly amidst a percussive framework and effects storyboard. An expertly executed main break proves to be the eventual highlight, as tonal designs intensify with a wall of sonic decay and trailing metallic sheets further obliterating your senses. It's an electric moment, and one which preludes and even better finale. A massive remix from Khen which you're bound to be hearing a lot in the coming months.

The second and final interpretation of 'One Man' is provided by Pole Folder who is also making his first appearance on the label. The Belgian producer rose to electronic music stardom in 2001 when a string of productions including 'Apollo Vibes' and 'Dust' were signed to John Digweed's Bedrock Records. The label then commissioned Pole Folder to record his first studio album entitled 'Zero Gold' which was released in 2004. Fast forward over 12 years and the Belgian artist remains a staple of the industry's top labels from Hernan Cattaneo's Sudbeat Music, to rising brands like Soundteller Records, Sound Avenue and his own Reworck imprint. There are few better at crafting emotional, atmospheric sound stories than Pole Folder, and he's certainly done that once again on his 'One Man' interpretation. Backed by a soft ambience; it's glacial flow, bulging bass tones and cinematic swells paint a gorgeous sonic collage. Indistinct vocals add a trippy flair, particularly during the break, as spaced out spirals descend over the framework leading to an exhilarating rush of beats, drums and icy pads for the ultimate dance floor moment. A wonderful remix from Pole Folder which rounds out a release full of variety and talent from 238W Inc. Don't miss it. Words by Mitch Alexander!